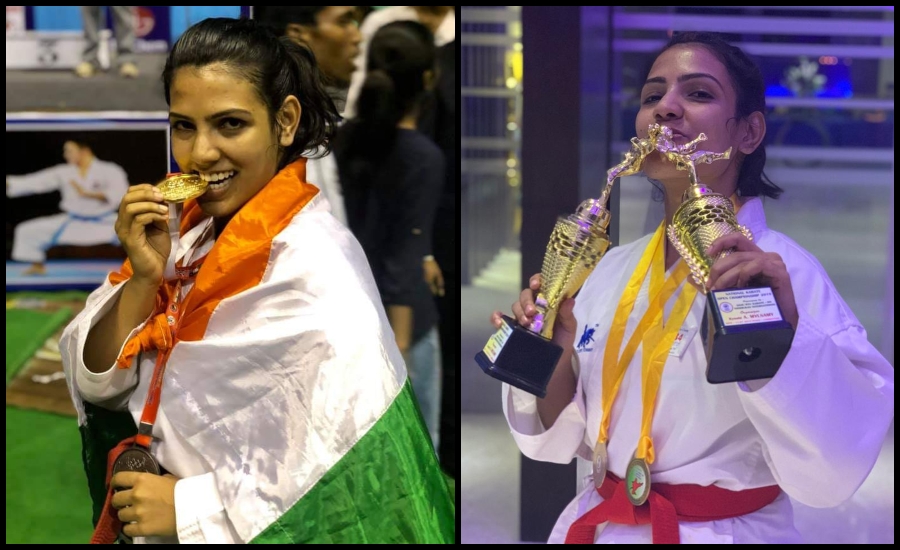 Proud sister of the Master of Martial Arts - Vivek Teja, Ramya left the monotonous desk job to do something challenging. That is when her brother, who has an expertise of 8 different forms of Martial Arts helped her to do something extraordinary which an MBA graduate never thinks of. Ramya's feat in Martial Arts is backed by her brother/ a coach every sportsperson deserves to learn from. He has made her aware of everything to be prepared from being a complete fighter to compete in all National & International grounds. Being a 24-year-old, corporate professional, her determination and sheer willpower made her quit the job to prove everybody that anyone at any point of time can start training in Martial Arts. Her valour to excel made her win a Gold Medal in her very first attempt at an International championship.

There are many more medals to be won for India by these fierce siblings of Martial Arts. Team imd1 is amazed to share Ramya’s success story!

Eight months ago, before getting into Martial Arts I was working as a financial analyst at SMP global. After that I shifted to Axis Bank as an Asst. Manager. I even completed MBA in finance. I was feeling like a robot when I was working. And I was really dissatisfied by the fact that I wasn’t facing any challenges. I wanted to do something different. One day my brother was at home, teaching me some basics of karate. Then I started learning its fundamentals. My brother thought “if I teach her professionally then she can become a champion”.He encouraged me in that way. Every day after coming back from office, for 1 hour I used to practice Martial Arts. Then I got more attracted towards it and finally I decided that I want to learn it in a professional manner and perform in a ring and become a champion. My brother even said that I have a quality of a champion so I should compete in matches, likewise he encouraged me. I was unable to give time to training and due to this I quit my job and shifted into Martial Arts for full time.

Know me Beyond Martial Arts

My brother Vivek Teja because he is a real life hero

Had I not been a Martial Artist then

Nagarjuna and my brother - A real life hero 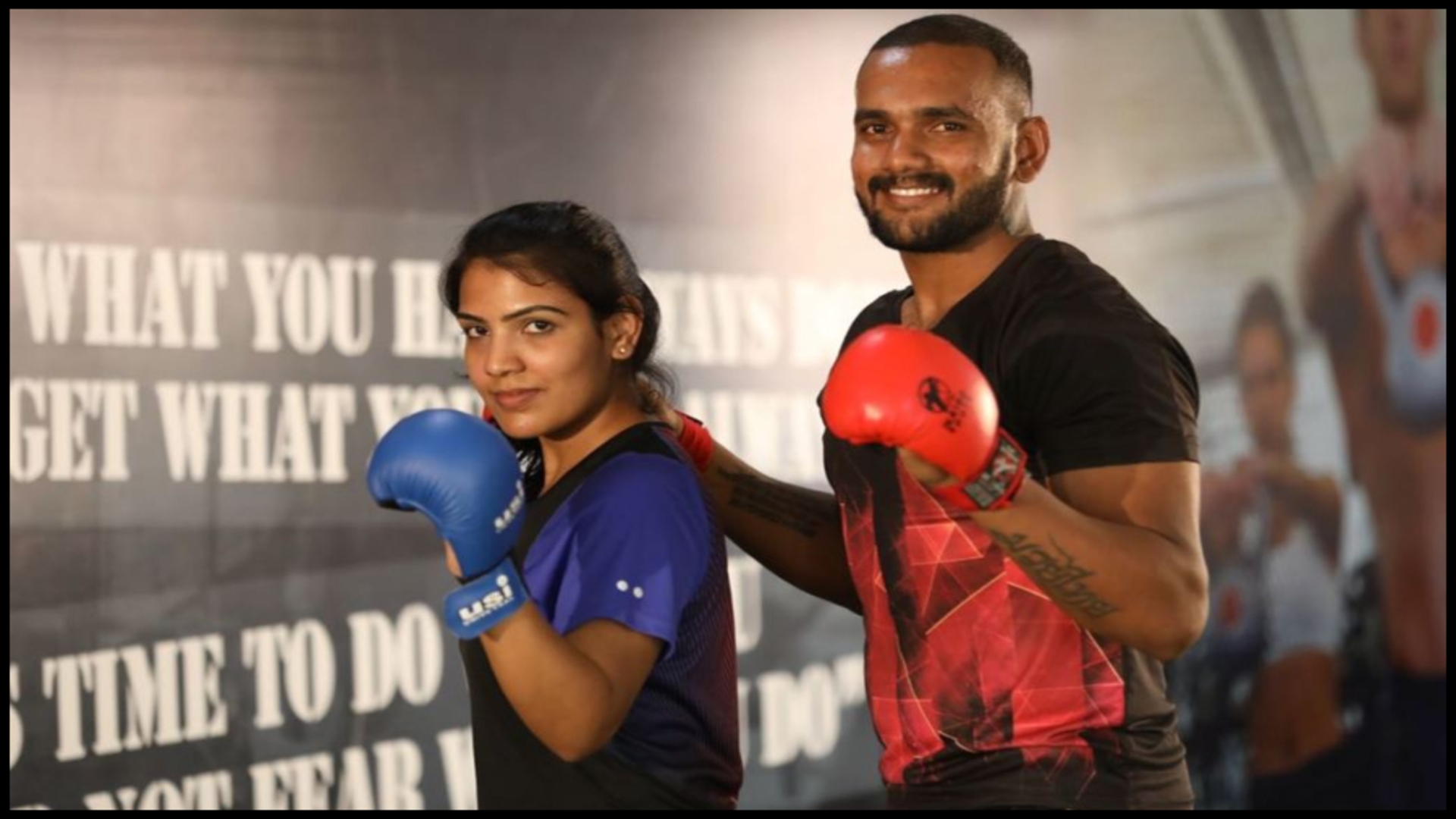 Many people discouraged me because I at the age of 24 years, shifted my career to martial arts. I was a topper in my intermediate schooling and a university gold medalist, a college topper in MBA and was very good at academics. I was doing well in my job, earning a 5 digit salary. People always demotivated me by stating that I’m spoiling my life, leaving everything behind and starting a career in sports. This was the first discouragement I faced. Secondly my body wasn’t prepared for this kind of sport. I wasn’t much flexible as I had a very rigid physique. I had to start everything from scratch. Later, I almost lost 10kgs weight to fit into a category for participation. For this I worked out for 5hours a day to get into that stage. Every sport comes with a lot of injuries and scars. Even at a point of time I was in doubt that why am I getting into so much of pain? This discouraged me at that time. It is because of my parents and brother’s motivation and guidance I have achieved this feat. Initially my parents were in doubt and worried when I decided to shift my career in Karate as I was performing and earning well in my job. But eventually when they saw me performing well in this sport, with the help of my brother’s encouragement they were convinced. Nowadays there have been a lot of instances where girls cannot be out on their own. So why can’t we train martial arts to girls in every family, not for participating in competitions but for their own self-defence. It is very useful in this sense and hence my parents were very supportive towards my decision of taking up Martial Arts.

You should never feel inferior for being a girl. Taking birth as a girl is itself the biggest power I feel. A girl is nothing but Shakti and when you’re born with Shakti then you can do wonders in any field. Never give up on your dreams. Aim for it and Work hard for it.

My brother and my parents both have been my greatest influencers in this journey.

Tell us something about your Coach…

Firstly, he (Vivek Teja) is a very lovely human being. He has an expertise in 8 kinds of martial arts. It takes a lot of years to learn one kind of martial art but since childhood he has been a professional in this sport. He has trained celebs like Venkatesh Daggubati, Rana Daggubati, Rakul Preet Singh, Sudheer Babu and Rahul Tyson. He is giving Self-defense training to Corporates, Colleges, Schools and other professionals and also free self-defense training for Govt Schools and colleges. Till today, he has trained 18 to 19 thousand women in his workshops all over the world. Whatever he teaches is of International standards because he has learned from the best of coaches in every form. He has travelled to many countries for learning different martial arts forms from where it originated and trained with the best coaches in the world. For Kalarippayattu, he travelled all the way to Kerala to train from the topmost coach. When we visit the originative place of any martial art form, we get to learn from its traditional essence. Most of the coaches screw us if we do anything wrong but my brother calmly guides me and says, “If you can’t do it in 10 times then do it for 100 or 1000 thousand more times”. He always encourages me, and indeed he is the best coach.

It is quite common to get discouraged and disappointed, but I feel that you must always focus on your goal and dream about its outcome. You must take every hurdle as a blessing which reboosts your confidence and patience. Definitely the hurdles and setbacks don’t matter, and these won’t disturb your goal, this is what I have personally felt. For those who discourage you, just keep in my mind that you have to prove them wrong with your success.

Do you think Martial Arts and its learnings can be helpful in life even if one does not want to consider it as a career?

Martial Arts is nothing but self-defence. You need not to take it as a career because self-defense is all about protecting your own self. People who don’t want to pursue a career can just develop skills to protect themselves and others as well. A person learning Martial Arts, Boxing, etc. becomes more disciplined, improves mental alertness and develops respect for others. One can easily reduce stress levels because when we perform martial arts, our happy hormones gets released.

There is nothing like right age. You just have to be mentally prepared as everything starts with your mind and you only need to be determined and focused on your goal. Age doesn’t matter, all you need is a good coach and a hardworking spirit. Within yourself. Keep one thing in mind that ‘After all you’re just going to get hurt and you will not die’ With this mindset, you can achieve wonders in anything.

How has technology transformed the world of Martial Arts?

People were not aware of martial arts especially in India but as the technology has improved, people are getting to know about the latest equipment and correct tools to use for better performance. They’re able to attend good training due to the developing infrastructure.

What according to you is scope of Martial Arts in India?

Like I said, people were not aware of martial arts earlier, but now more and more people are showing their interest. Schools and colleges are being supportive by conducting sessions of martial arts and encouraging champions to play for our country in International levels. As compared to previous times, the scope has truly increased. Proper support must be there from parents, schools, government and from everyone.

If you were to bring one big change in the way people get trained in Martial Arts, what would that be?

In India, most of us are only fond of cricket. After P V Sindhu in Olympics proved people her success, many other sports now have come into existence. Similarly, my brother and I wanted to bring such change for marital arts all over India and hence he is all set to compete in Olympics 2020.

What do you suggest for better accessibility of Martial Arts training in remote parts of India?

Sending certified trainers of Martial Arts to remote areas with good equipment will be a good activity to make it accessible for people in remote parts of India.

Education only defines your well behaviors and manners. It’s not that you can only make money with a degree. If proper education is combined with co-curricular activities, then we can really do wonders. It would be the best gift to children if their parents support them.

“You should have nerves of steel and muscles of iron and minds like thunderbolt” quoted by Swami Vivekananda.

There have been many moments in my life when I felt like “I Am The 1”. When I emerged as a state topper in my commerce intermediate studies, that was the first time I felt like ‘I Am The 1’. After that when I stood topper at the Mahatma Gandhi university again, I felt the same. I was a college topper in my MBA course. I have received an appreciation award from National Stock Exchange. I have also received Pratibha Award by the government when I topped in state boards. Coming to my achievements in sports, in my first International tournament itself I won a gold medal and recently I have won two golds Nationally. My Parents’ and brother’s eyes were shedding with tears of joy and that’s when I made them proud. These are the ‘I Am the 1” moments of my life.