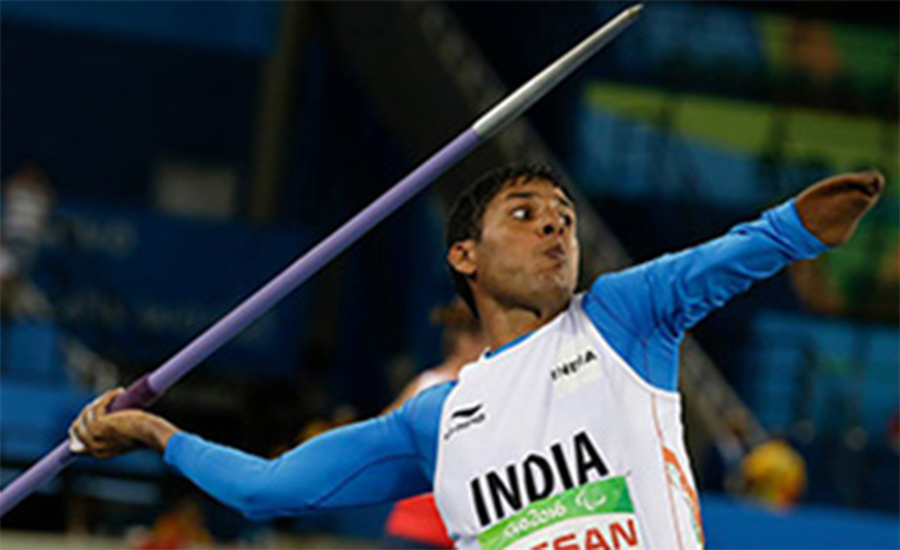 Sometimes when life takes a tragic turn, it also provides a road to bliss and accomplishment. A 9 year old boy from a small district of Rajasthan was enjoying his routine play of climbing a tree; when an electric shock turned his fate… but ultimately for good. A man with an arm of gold and an iron heart, Devendra Jhajharia is one such sportsperson who proved himself that nothing can beat your strong-will. At the age of 35, he is a record holder and record breaker with 2 individual Golds for Javelin throw at the Athens Paralympics in 2014 and again at Rio in 2016 where he created a new record. Only four Indian athletes have an honour of Gold Medal so far and Devendra is the only one to do it twice. The recent Khel Ratna award to him is the true recognition of his contribution and specially in Paralympics.

Team imd1 had a chat with him a few days ago, read on to know her further!

At the age of 9 years, I lost my arm due to amputation which resulted from an electric shock after I accidently touched a live cable wire, while climbing a tree in my village. I was disheartened at that time. I was embarrassed and scared to go out of the house. People had disowned me. I heard comments like, “it was better if he would have died”. Back in those days, around 28 years back, the society was much more conservative. I locked myself up in the house to avoid getting taunted by others. I had no answers to their questionable eyes. I was very young to understand all this. My mother Jivani Devi encouraged me to play sport. I can never forget that day and will always be grateful to my mother for motivating me to go out and play just like other kids. Stepping out of the house to play at that moment was the start of my journey. Other kids termed me as weak. They had doubts on my capabilities. I wanted to prove myself. I started with sports in the year 1995. I was studying in Ratnapura government school. When I was in 10th, I used to watch other kids practice javelin during intervals. I came home and made javelin out of wooden stick but it was not as good as the original one as used in school. I found Javelin interesting and realized the talent inside me. After I came first in school competition, they selected me for district level and I won competitions in non-Paralympic category. I became district level champion while playing with able bodied sportspersons. I proved myself and my family encouraged me further. I competed at college level with able bodies at youth championships. Then I came to know about Paralympic tournaments. Somewhere around the year 2000 under coach RD Singh, I competed in Paralympics at Bangalore tournament and in Para-Asian I won Gold. Victory followed hereafter. In those days, there were lot of challenges and one had to literally prove oneself.

“Woh abhi jeeta nahin main abhi hara nahin toh main haar kaise maanu” (“NEITHER THE OPPONENT HAS WON NOR I LOST, SO WHY SHOULD I ACCEPT DEFEAT”, says Devendra to himself while going to each competition)

Had I not been an athlete then

Spending time with family especially my daughter who is 6.5 years old. I love to converse with her. I am also fond of watching animals. 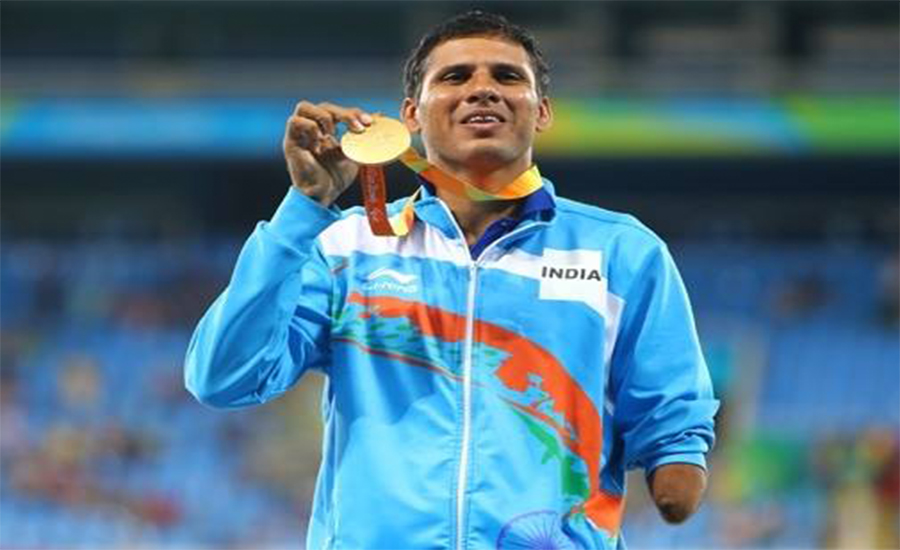 Kids are innocent. At one occasion of javelin when I was very young, I abruptly confessed that when I grow up I will become a champion in javelin throw. There were young & adults present there. Around 25 People out of 30 made fun of my dream of becoming a world champion. I felt bizarre that when I am working hard and confident to win in future, why do they doubt my abilities? There were 4-5 people who were supportive. But I ignored all the negative thoughts and focused on achieving my target.

When I started with sports, I hardly had time to study. It was difficult to balance both. I was aware that my studies were affected due to trainings but I overcame it since I was focusing on sport and gained a lot from it.

Do you think Athletics and its learning’s can be helpful in life even if one does not want to consider it as a career goal?

It doesn’t mean that you become athlete or enter into sports to win Olympic medal. Everyone cannot win Olympics. Sports help you to stay fit and it also helps in raising your confidence level.

My mother was the one who motivated me to play sports. Without her cheering me, I would not have started playing and gained that buoyancy. I belong to a very simple farmer family. In spite of that, my family never stopped me from doing what I wished.

My win in district championship made me prove ‘’I am the 1’’. Though it was not at a very grand level but it provided me with an opportunity to enter international level sports.

My training started in my village Churu district, Rajasthan We had no proper equipment for javelin. Using sticks and lifting weights was the beginning of our traditional training. Natural way of training helped us to become stronger in height & body. We had no coach. Our teacher in school used to train us. In 1999 I went to Hanumangarh district in Rajasthan for training. I started my formal training in the year 2000. My journey has been very different and has various phases of disappointment, struggle and success.

used to go to Jawaharlal Nehru stadium for practice. There is nothing particular about high jump coaching. However, my formal training as a para-athlete began under Coach Nikitan Uffgan at Sports Authority of India (SAI), Bangalore. He was appointed as our mentor for the Olympic and I have been training under him since.

Could you reflect on the importance of systematic training in Athletics?

If we talk about Javelin, step by step training is necessary to avoid any injury and gain a certain fitness level. There is a lot of force which falls on the body while throwing a javelin. Muscles have to be strong and trained to bear that compression. Gym exercises, treadmill and other body fitness training are required.

Are there any prerequisites like age, fitness or a particular type of mindset required to pursue Javelin?

Height and body structure are the pre-essentials to start coaching of a child in javelin throw.

Technology and scientific training have been changing the way people get trained in Athletics. What’s your take on this?

If you don’t have the technology, it is difficult to become efficient in sport. For muscle strengthening & flexibility, there is a specific exercise. As compared to earlier, now there is more awareness on training. Times have changed.

A child will not understand which guru is good for him. The parents have to identify a coach which has good experience. My coach was my friend. One needs to share good rapport with your coach in order to communicate well.

What according to you can be a scope of improvement in training for Athletics in India?

We have good training in India but not as compared to world level competitions. For instance, for nutrition or physiotherapy one needs good consultation. But we do not focus on such important details. We need to promote Para-athletics from school level with better infrastructure & training.

Whenever someone says I am the one, it reminds of the Justin Bieber song [laughs]. Jokes apart, to be the one, you have to prove yourself. It cannot simply happen if you are not putting your heart and soul and pondering the hard work and dedication to be the “One” and be a step ahead.For Rio I received TOP (Target Olympic Podium) scheme due to which I could afford a personal trainer and travelled abroad for further training. This worked in my favor and boosted my performance.

We should have stadiums at district level with better substructure. It is difficult to identify talent without proper stadium. Local and state bodies need to work together to improve our infrastructure.

One must have a focused goal in life, and your goal should always be in front of your eyes. I would like to give an example. During my training period, all the sportspersons after training would hand over their Javelin to store keeper to be kept in Store room, but I used to carry my Javelin with me in the room. My mates would ask me why do I carry to the room, I always said, I want to see my target in front of my eyes even while going to bed.

Whoever you become in your career, but you cannot remain fit if you do not have physical exercise. A doctor or an engineer might find it difficult to remain fit for life but a sports person will always be disciplined when it comes to fitness. It is essential to play any sports to lead a healthy life if not career. Thus, extra curriculum like sports should be made compulsory in schools and colleges.

I don’t regret anything. Even if something wrong happened I took it as a lesson. Once I had suffered a major injury of elbow in 1999-2000 during my initial period of career, again in German Throw elbow injury is considered quite critical. That time I just prayed for my recovery as I wanted to play much more. It took 8 Months of treatment but I am grateful to God to give a chance.

First is the interest, second Talent. Everyone has some talent but not all have the interest to take it as a sport or profession.

In my journey my biggest support after my mother has been my cousin Arvind Jhajharia. We started sports together but he quit after his accident. It’s been 17 years and I owe a lot to him. He is my friend & family and we have been together in thick & thin.