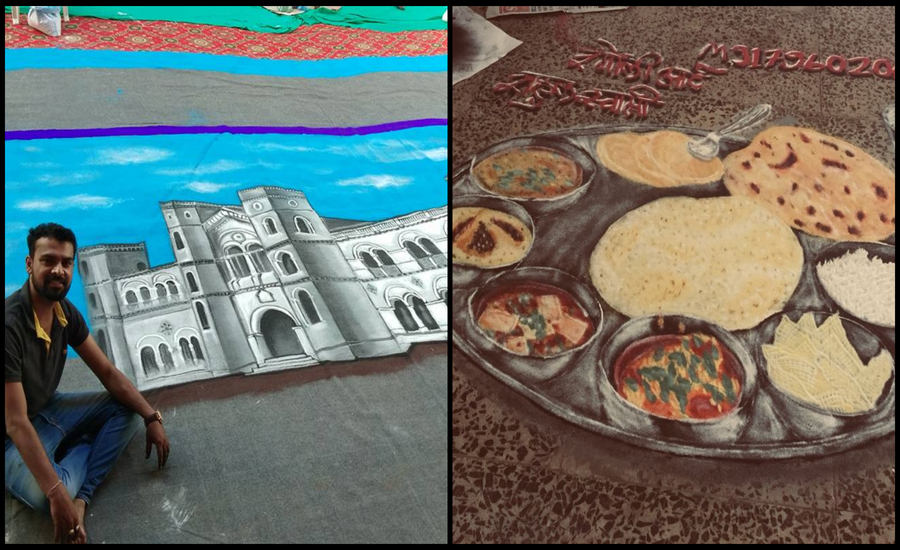 Rangoli is an art form originated from India, practiced since the ancient, medieval and even in the modern days. Rahul Swami is one such example to continue the legacy of this art form. Started off through learning the roots of Rangoli i.e. the Sanskar Bharti Rangoli and since then he went on innovating new ideas at such a level that till date, he has never repeated a single design in his Rangoli. He has created more than forty thousand Rangolis and never planned a single design. He has astonishingly made Rangoli on an area of 24000 sq. ft. equivalent to 4-5 basketball courts in just 13 hours, which resulted in his name being added in the Limca Books of World Records. Currently, Rahul is on his way to add his name in the Guinness Book of World Records and prove the world that Indians are exceptionally talented people.

When I was small, my elder sister used to make Rangolis, I was very eager to learn and make the Rangoli along with my sister and everyone used to stop me from making Rangoli, so I prepared powder of the marble on my own and drew Rangoli on my own. After my SSC education in my hometown, I visited my native place Pune during my vacations. My Mama (Uncle), my first guru from whom I learned the traditional designs and complex designs. People in Pune are particularly fond of Sanskar Bharti Rangoli. After learning about it, even now I don’t follow any trend or any pattern for Sanskar Bharti. I usually follow the designs of embroidery of saree and Mehendi patterns. Every time when I make Rangoli the pattern are innovative and unique whatever comes into my mind. It took me three and a half years to get perfect in this art. I take classes, but the basic course is only for a month, but it won’t help anyone until you are practicing it yourself. I teach a unique technique. I have made 35 to 40 thousand Rangolis till date but have never repeated a pattern again and whenever I do, the attempt is impromptu as I don’t plan anything prior.

Whenever and wherever I make Rangoli, I have this thing in my mind that creativity makes life more fun and more interesting and it is just about connecting things. Simultaneously, the suspense of ‘What’s Next’ arises and this is what excites me. Whatever I try to create I make sure it is entirely new.

Know me Beyond Rangoli

I draw Inspirations from

Had I not been a Rangoli Artist then

“I would have been a Dancer” 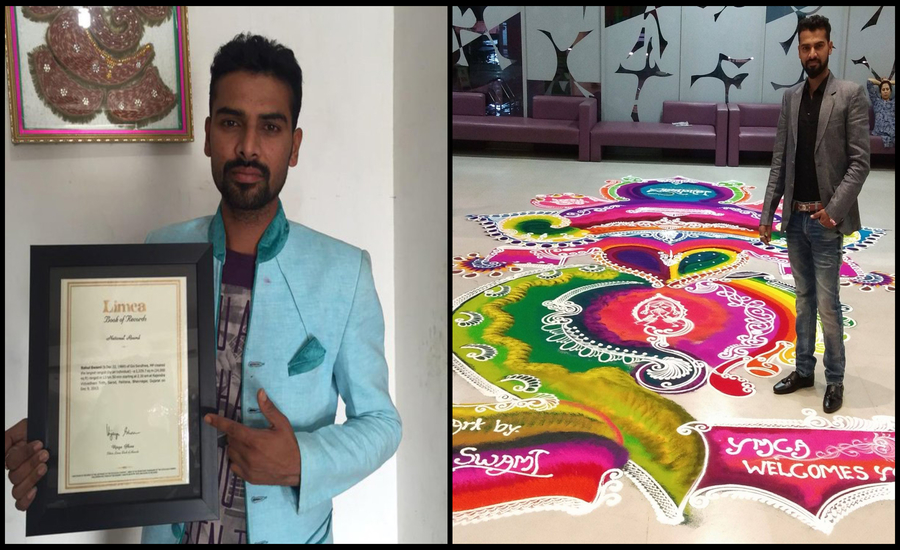 What were the hardships/hurdles you have encountered and the way you overcome in your journey?

When I began my journey in this art, I did not have any contacts, I have created many Rangolis for free. I had to buy the coloring material on my own whereas some paid me the traveling expenses. There was a Jain event in Rajasthan, which was a gala event where all the religious Jain practitioners all over India had come to attend the event and my artwork received recognition by the whole nation and on social media. Then in 2013, I got one more chance to prove myself. It was for the Limca Book of Records. I did not fit in for the Gunnies World Record because it does not have a single man’s category in Rangoli making, only the largest Rangoli is considered. It doesn’t matter if one, hundreds or thousands of men create that largest Rangoli created in a day or a month. So what is the value of a single artist? That is why I chose Limca book of records and in that, I created 24000 sq. ft. Rangoli by using 5500kg colors which took me 13 hours to complete all by myself. And till date, no one has broken this record. Now it’s been 14-15 years since I am in this creative field professionally and the whole nation knows me by my artwork.

I used to follow my sister when she used to make Rangolis and I have learned the fine details about the art form from my Mamaji.

Which was ‘that’ moment when you considered yourself as “I Am The 1”?

There was a procession of Sadhus, where they wanted something different for the occasion, the whole procession was 2.6km long so I decided to create Rangoli from the point the procession started till the point it ended. The whole stretch was 2.6km long. After the completion, everyone including the Sadhus, media persons and journalists said that “He is the one”.  For me, the feat of Limca Book of Records is the best one to date and when I achieved that, I truly felt as “I Am The 1”.

Did you get any formal training of Rangoli and how was that journey?

I am trained from Pune by my Mamaji, that’s all the training I have received, the rest is all my own creativity.

A sensible mindset, one who has an understanding of art can practice Rangoli. I feel our mind starts grasping any creativity perfectly from the age of 10 years.

What qualities must one look for in a ‘Guru’ for training in Rangoli?

A Guru must not show him/herself as a superior in the craft and he/she should be the one who can create something extraordinarily exceptional.

Whatever studies your child is doing is very important but also, they should invest their time in whichever form of art they like because art is as necessary as education. Because being an artist is a very meaningful thing in life and you place an artist in anywhere in the world, he/she would never sleep hungry.

There were many things as I feel I’m still behind, I’m just known in India till date. Now I want to show the true Rangoli Sanskruti of India to the whole world.

If you’re talented, then you should not hesitate at first to perform or portray, just show your talent and prove yourself, this is what I have done, and this is the only way you will be recognized amongst the people.

I just want to show the true Indian Rangoli Sanskruti to the whole world and I want a single man’s category in Rangoli making in Gunnies World Record. Indians can do a lot many things and we are not behind in any field that is what I want to prove.