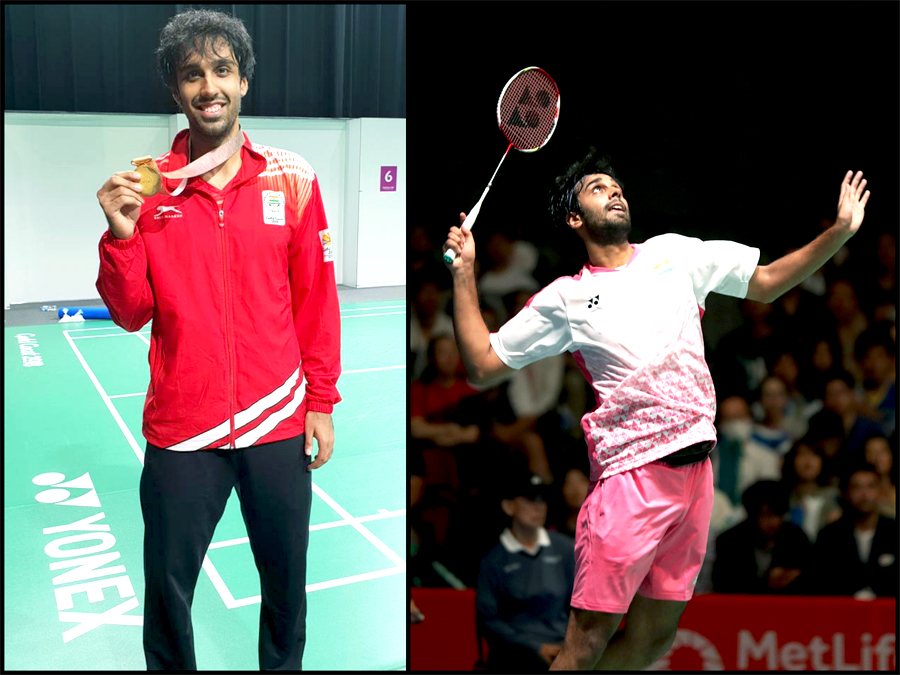 Hailing from Ludhiana, Pranaav lifted badminton racket at the age of 7. To start with, he became the National Champion in Category U-13 and U-19. After winning nine titles in Under 19 in a year, his early training started at Gopichand Badminton Academy, Hyderabad, practicing eight hours a day. He preferred playing doubles and mixed doubles instead of singles. Pranaav’s achievements are endless, he has won medals in several national ranking tournaments, like Youth Commonwealth Games, Pune, Mumbai, and Tehran, Bern, Switzerland and many more.

Our team had an amazing time interviewing this inspirational sportsman. Read about his journey to fame.

My dad used to play cricket and he himself is a sports lover. He made my brother join a cricket academy but also wanted him to study well, as he was severely diabetic, and my dad just wanted us to be fit. In Ludhiana, he played badminton every morning in a club with a group of his friends and made me join that club to play just for fun and that’s how I slowly started being passionate towards it, he went ahead with the decision of letting me make a career in sports. Because anyway my brother was studying and joining the family business, so I was a bit luckier.

Know me beyond Badminton

Had I not been a Badminton player then… 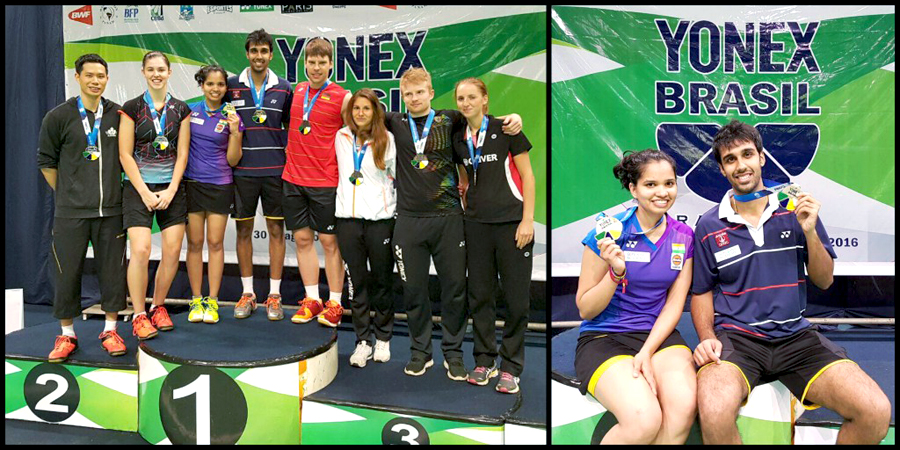 As I said, just focus on what you need to achieve and keep working hard for that.

In Ludhiana, I started off from state tournaments followed by nationals, but the problem was the level of training, as it wasn’t that great, nobody really wanted to push themselves and the coaches didn’t have much interest while All India National Tournament was ongoing. When I was in under 13 team and my dad wanted me to take this sport professionally, he sent me to Mumbai where I lived alone and did my schooling for two years, I trained under Uday Pawar. That was the time when everything changed and seemed very professional to me. Hailing from a place like Ludhiana and shifting to Mumbai, living alone, studying and practicing at the same time was indeed challenging. My mother used to visit frequently but most of the time I lived alone, I was just 11 or 12 years old. It was hard training under Uday Pawar and I really feel fortunate that I could train under him because he is a coach of that level, this changed my journey, I could perform in All India Nationals and then I got selected for the National Camps later on.

You’ll keep facing them in every step. There comes a time when you do not succeed at all., it’s just that you need to keep going and you need to know in your mind that you’re not doing the wrong things, you have to be on the right track and even if it is not happening now, eventually it will happen.

Do you think Badminton and its learnings can be helpful in life even if one does not want to consider it as a career goal?

My parents have always been my influencers because we all face bad times, failures and if you don’t have people around you who support you then that is the time you tend to go down, you go in depression and you just can’t believe in yourself. My parents have always been around supporting me even if I had worst of results, they just kept saying, “its ok, it’ll happen, it’ll come, you’ll get the results”. I have 5-6 friends in Badminton, we’re really close to each other, because they’re in the sport so they know and relate to every aspect about it

Actually it is like we play so many tournaments in a year, wherever we perform, we have that feeling with us It was the first time when we played Semi Finals in the Super Series Tournament, we were only the second pair after Diju & Jwala and I saw big players like Saina, Sindhu, Diju and Jwala do well on the top in the tournament, but then for a long time no one performed like them and it was me and my partner who did that and we lost the third game, the score was 19-21, we missed some points but that was the moment when I felt myself as “Yes, I Am The 1”. I have already won the GP Gold Tournament in 2017 but the Super Series Tournament is a next level thing where I stood at the second place from India, it really felt good.

If you really want to do something, then the right age to begin would be around 8 or 9 years for a sport because you take that much time to know and learn about it. Once you start performing you already have the motivation, to really commit and begin professionally is to start since the age of 8 or 9 years.

Yes as I said in the beginning that the training was just not that professional, we somehow managed to enter the un1``der 13 team but when I came to Mumbai, professional routine started since then as I was staying there only for Badminton, schooling was just a matter of time for me and daily I had my morning and evening sessions with my coach, he was really taking care of me because I came all the way from Ludhiana specially for the training and no other player was in there from so far. When I got selected in the National Camps, training turned more professional because you get to train with the top national players, where you can improve your gameplay because everyone apart from you are way ahead and experienced.

Could you reflect on the importance of systematic training in Badminton?

It is essential everywhere because you can’t train hard without any proper system or idea of it. Anyone can go and work harder than you but there is no point if you don’t know what you are working for, what exactly you want. So it is more important to work smarter because only working harder won’t let you reach anywhere. We have also learned this from the European training culture, earlier we used to train for 9 hours a day, it was just like training without idea or knowing what a proper training was, but as you meet new people and see how they get trained you adapt their pattern. Now we have a Malaysian coach Tan Kim Her, he has such a vision that as we (Indian Players) don’t have an inherited physique like the Chinese and Koreans, so we could be good tactically, our strategies must be powerful, just what the Europeans do, they’re really good in analyzing the game and plotting the moves, their level of focus is up to that extent. Hence it is more important to work smarter.

Technology has been changing the way people get trained in badminton. What’s your take?

Before we were training without knowing the proper guidelines, we never knew what exactly is helping us. But then these technological methods come, and you get aware of something and if you get what your juniors are getting then it would surely help you as the juniors have all those facilities since their beginning, so the technology has really helped us to know what to train for and get the better ideas for results.

What qualities must one look for in a ‘Guru’ for training in Sports?

There is nothing like an ideal Guru, you just start with someone who has an experience. It’s all about trusting your coach, if you can trust a coach then I think he/she will take you to that level as there are different levels of coaches, once you’ve passed a level then you can move forward to a more experienced coach. And I think India has so many coaches in many places, but we need some more good quality coaches and there are so many academies, nowadays you can start from your hometown because you’ll have a coach available who has played in some national or international level then when you need more leveled up professional training then we lack such high level coaches because such coaches don’t feel that much motivated and don’t get paid much for this job so this is what is something we lack and we need people to come forward to train players.

If you were to bring one big change in the way people get trained in Badminton, what would that be?

As I said, we need good quality and learned coaches, we do have but we need some more, not many ex-players want to come forward and train because they don’t get paid much for this job and they don't want to leave their hometown and families to come in cities to train the players because they run their own academies in their places, but that is something not helping the players as we need good coaches but it’s not anyone’s fault since the coaches don ’t get paid enough. This is something I feel we’re lacking and if this is fixed then with the help of such a great technology we can reach to greater heights.

It has already been reaching to various parts of India, I have been to so many small places where there are people who have opened their own academies, they’ve played domestic tournaments, gained some experience and started to train aspiring players. I think it has been progressing in the smaller parts too.

You need to believe in yourself that you can do it, you really need to keep yourself motivated, be around good and positive people because there comes a time when you fail, don't get results and when you get demotivated, for that you have to surround yourself with positive people.

Now I could say that as imd1 has published so many success stories about so many sportspersons, sports is just not an ‘ extra curriculum anymore, if you just want to have some fun with it then it is different but if you're looking forward to it professionally then you have so many options and so many people to read about who have done so well than what they could be if they continued to remain in academics. It is all about what you really want, and if parents are interested to support their child for getting them into sports, then they should really go ahead and support.

My injuries, as they’ve been really bad because it’s not something what we want. We work so hard to not to get injured but if we get bruised then the time to heal and the support you need is very important. So I would say injuries is the one thing I never wanted to happen.

We all have ups and downs, so just keep pushing yourselves forward, if not today then tomorrow it will definitely happen.