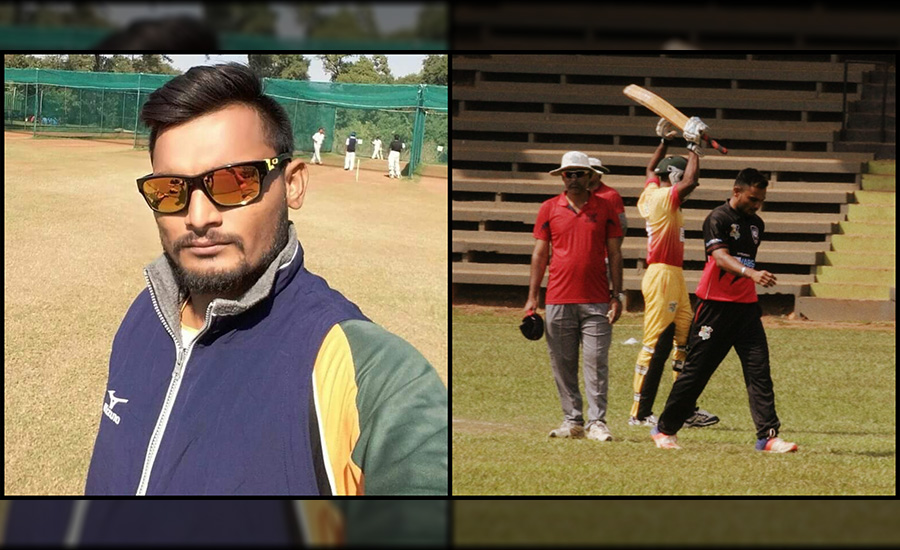 We all know the amount of love and cheers a cricketer gets in our country, but what it takes to be in that limelight? Kirit Vala’s journey is the answer. Hailing from Saurashtra Gujarat don’t underestimate this budding athlete as he has kept his eyes on the prize since the day he began. We wish him all the luck and we are sure to see him vow the stadiums very soon.

I was accustomed in playing tennis in my village. My friend who lives in Baroda was aware of cricket and insisted me to play cricket as I was talented and skilled in sports according to him, I had no idea about cricket back then, so I went to Baroda for training, since then I began playing for under 16 team and for two years I played for the under 19 team.

Do you think Cricket and its learning’s can be helpful in life even if one does not want to consider it as a career goal?

Life is all about the choices you make

Had I not been Cricketer then…

I could have joined the Army I’m influenced by Sachin Tendulkar, I used to watch his matches on TV since when I was 8-10 years old.

My coach, Nayan Sir trained me in Baroda and appreciated my skills, by saying that if I put more efforts then I would surely reach great heights and that was the moment I felt as “Yes, I Am The 1.”

I started formal training by joining Bal Bhavan Cricket Academy in Baroda, where I trained under Yogesh Jethani Sir, then after my selection in U-16 team, I joined Baroda Cricket Association and trained under Darshan Mulherkar Sir and Nayan Mongia Sir. Currently I’m practicing under Mahipalsinh Jethwa Sir from Dwarka team and Rohit Balla as personal coach in Mumbai.

Could you reflect on the importance of systematic training in Cricket?

Primarily, fitness is the most essential aspect in any sport. You need to do a proper warm up before practicing and for cricket we perform drills, walk, exercise bowling in a corner to prepare ourselves for the practice.

If one wants to make career in cricket, then he/she must begin from 10-12 years.

Technology and scientific training have been changing the way people get trained in Cricket. What’s your take?

Many a times our performance is recorded, and a video is made for further analysis to figure out and judge our gameplay, hence technology is viable in sports and especially in cricket for better judgements and results.

How can one select an ideal ‘Guru’ for getting formal training for Cricket?

According to my experience, we don’t get to choose a Guru or Coach of our choice as of nowadays, there are Level 1, Level 2 exams held by BCCI which we must have to clear to get certificates and receive advanced training under a Coach. It wasn’t like this earlier, even a Ranji trophy player would get into BCCI and train under anyone but now one must appear for the exam to train under a coach.

What according to you, can be a scope for improvement in training for Cricket in India?

There must be some better facilities provided by the clubs or associations, like how the international players get professional gears and cricket bowling machine for net batting practices but we practice manually as we don’t have that much resources and cannot afford them, and this eventually becomes an obstacle. But I must say that cricket in India is evolving day by day due to the craze of IPL.

Along with the studies, sports must be a part of the curriculum, with this, one would be fit and healthy and this would eventually help a person to perform well in the academics. Both the things should be managed equally. If someone is only interested in studies, then he/she should invest some of their time in sports and vice versa.

Earlier when I began, it took me 5 hours to practice but I have reduced the practice sessions to 2 and a half hours only for a quality practice.

I just want to say that cricket is a very serious sport, one must put a lot of efforts in it to be a skilled player. One more thing is, like how cricket is praised and celebrated triumphantly in our nation, in the similar manner, other mainstream sports like Hockey, Football, Basketball, Boxing, etc. should be acknowledged to encourage all the sportspersons for emerging victorious globally and make us proud.