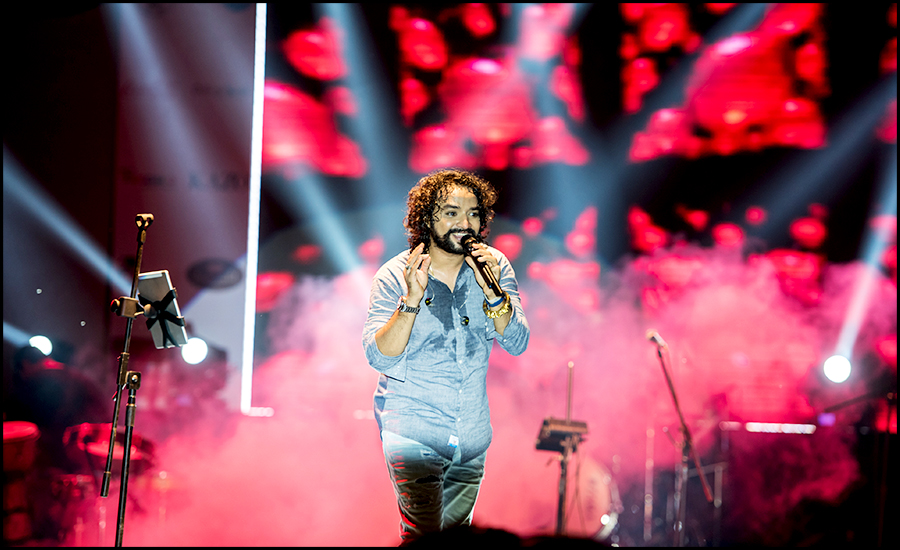 Rightly said by the rustic voice behind the epic title track of Satyamev Jayate. Keerthi Sagathia is following the legacy of his renowned father Karsan Sagathia - a celebrated folk singer. Hailing from Mumbai, Keerthi’s voice has an aura to make every Indian groove on his tunes with his flawless singing in Hindi, Gujarati and even in Telugu. When questioned about when he started to sing, even he was unable to answer because since his childhood he is jamming with his family which is full of musicians. A Maestro in singing Hindustani Folk & Classical, Keerthi believes that one must attract projects rather than to chase them in the industry. His expertise in this genre is what aspiring musicians look forward to learn. We have wholeheartedly enjoyed grooving to his voice in famous hits like Chikku Chikku Boom Boom from Masilamani, Nakkadwale Disco from Delly Belly, Bharat Mata Ki Jai from Shanghai, Tum tak from Raanjhanaa and many more.

Team imd1 feels elated to have a soulful musician share about his experiences in the Music Industry.

I was born in a family of musicians. I used to sing in wedding functions with my father but I don’t remember exactly at what age I started to sing. There is a cassette of me performing with my father when I was 4 years old, it was my first performance publicly. I don’t remember when my journey started right from regularly jamming with my family to singing for the audience. Even today when I sing on stage, I feel like I’m singing for my family. I always comfort my audience as my family members. I remember when I stepped into Bollywood. Hum Dil De Chuke Sanam was the first film where my father Karsan Sagathia made his debut in Bollywood as a playback singer. He used to take me in the recording sessions where I realized I did not want myself to be limited till folk singing. During 1980s and 90s, the chances of a folk singer getting a whole song were very less because a folk singer is considered as a character like Qawwali and Ghazal singers. I approached many music directors but like many others, even they diverged me to Tips and T Series. I further went on to sing jingles for advertisement just to experiment. Experimenting is one thing where you are open to all sorts of projects. Through experimenting in advertisements, I met Vishal-Shekhar for whom I sang their very first ad commercial for MDH. I also met Ram Sampath sir and AR Rahman sir. It was a very easy-going bridge for me and that’s how my journey in the music industry began.

Know me Beyond Singing

My Father and Amitabh Bachchan

Had I not been a Singer then…

I would have been nothing 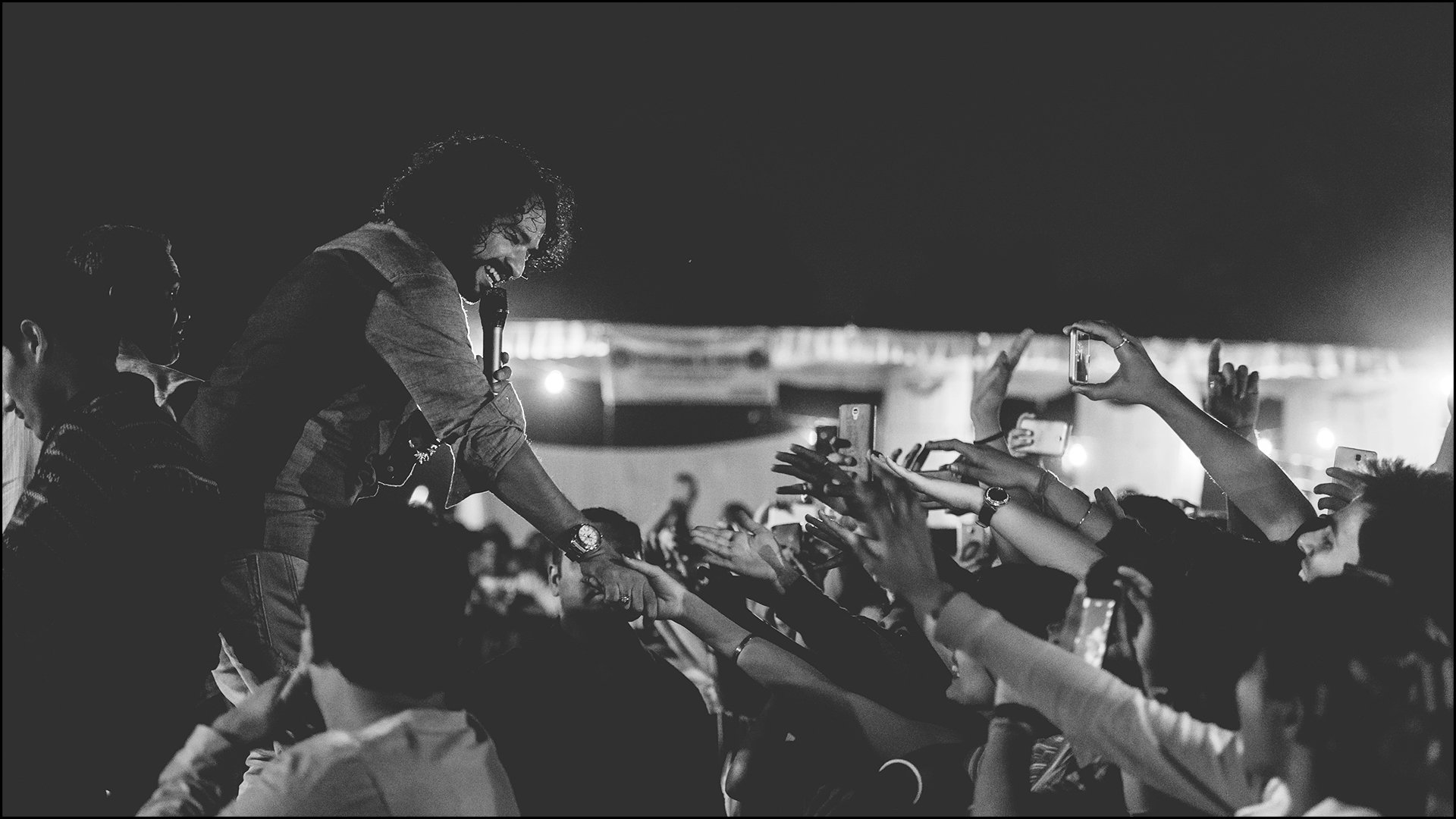 I am not amongst the ones who give up. If something is wrong, then I tend to figure out what am I doing wrong? If still I don’t improve in it then I never leave. There have been many instances where I have sung a song for films but not received any credits. I did not battle for it, I rather focused consistently on upcoming projects to give my best.

You should always keep on doing Riyaz (practicing). For an artist who’s painting is not selling then s/he shouldn’t quit but consistently keep on creating new paintings on canvas because you never know which painting will bring you success. For me, success is not achieved but it is created by you. You have to make it; it is not available in the market.

Success is incomplete without its share of setbacks. What advice do you give to others about handling the setbacks?

You will always be secured if you are in your boundaries but if you want to achieve more then you have to come out of your comfort zone and face challenging situations, consequences and competitions in life. That is when you will learn to fight back.

Do you think Music and its learnings can be helpful in life even if one does not want to consider it as a career goal?

Basic learning of music is very much essential just like how a child is taught alphabets in kindergarten so that s/he is able to form sentences as s/he grow up. Awareness of music is very important at first and then there comes learning. Learning is not only about gaining knowledge but also being actually able to perform in front of mic. To be able to understand music through Guru is much important. One must observe the music than to just listen to it and this is what matters for a singer.

Which was "that" moment when you considered yourself as "I Am The 1"?

I sang Satyamev Jayate’s title track for which many others’ voice was also recorded but Amir Khan sir and Ram Sampath sir chose my voice over everyone’s because it suited the best and for me this was my biggest break. There was an event in Baroda where I was in AR Rahman sir’s crew to sing a song. He pat on my back as I finished singing the song and these were the true moments when I just felt like “I Am The 1”

Did you get any formal training for Singing? Kindly tell us about it…

I learned classical music and I am still practicing it. YouTube has become my Guru because whenever I cannot sleep, I turn on YouTube and watch Guitar lessons on it. I used to live in my Guru’s house to learn classical music. Even today I keep practicing those 10 exercises of Sa Re Ga Ma. I don’t have a degree in music. I feel a degree can give you a job, but experience can make you an artist and a star.

Could you reflect on the importance of systematic training in Singing?

Nowdays there are various internet personalities who easily become music sensations but in future you cannot assume them singing like Lata ji because she has a formal training in music. An ordinary person cannot sing Lata ji’s or Rafi Sahab’s song in a justifying manner. Most of the viral singers sings with emotion but Lata ji sings with emotion as well as experience. Legends like Lata ji, Kishore da and Rafi Sahab’s songs are lessons for the upcoming generations to learn.

There is no age to learn. One can learn at 4 or 70 years of age. But if you want to take music as a career then begin learning at the earliest but if one wants to pursue as a hobby then it can be done at any age.

Technology is changing the way people get trained in Music. What's your take?

Every coin has two sides and similarly the intervention of technology has positive and negative growth. Music is never meant to harm anyone. Some people like Rap music but some may not. A music creator always creates music thinking about his/her audience. Most of the people use autotune but it is also created by us and there is nothing wrong in it. Technology advancements did not affect my career. One must work hard in such a way that the music will need you and you shouldn’t chase anything.

What qualities must one look for in a 'Guru' for training in Music?

A Guru is always flawless, and you are the one who make flaws. For me, I feel a person can become a Guru when s/he feels s/he can make someone’s life. We cannot doubt that person.

If you were to bring one big change in the way people get trained in Music, what would that be?

People should learn Hindustani Classical music more. Every Indian state has its own folk style. Indian music is very rich. Every learner should learn about folk music. I feel sad when foreigners learn Indian music and our Indian musicians are busy practicing the western tunes. I am sure that if we keep our base in Indian Folk Music then we will be the strongest musicians in the world. Firstly, learn the music inherited from the soil of your birthplace then the classical and other aspects come secondary. I have travelled to a lot of places to perform and everywhere people said I sound like Kailash Kher, Sukhvinder Singh, etc. This made me stop singing on stage for 5 years. I decided to find my own voice first. Today people don’t compare me. Hence you should have your own identity.

I would really love to study and complete my education if get a chance to go back to my childhood. I am often unable to understand people due to lack of education and this is why I have to struggle more in music to make people understand my thoughts.