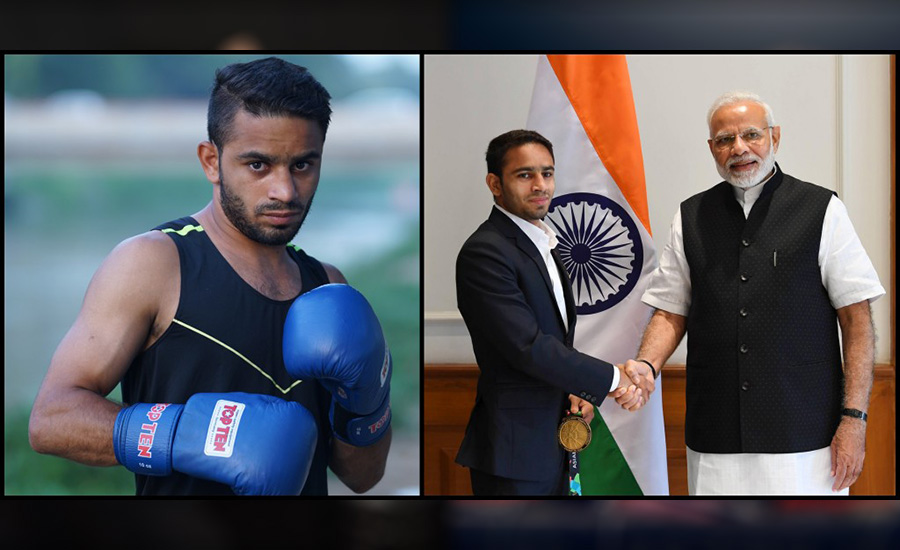 No matter what kind of strength these scientific supplements nurtures, the true power is hidden in the taste of ‘Desi Ghee’ and this three-time-gold-medalist-in-a-year is all about representing his roots- Haryana. Been training in the mountains, Amit has become an undefeatable beast all these years, all thanks to his mentor Anil Dhankhar ji who had his back when the chips were down. Today Amit is all about planning strategic moves against his opponent and knock him out like it’s his daily job!

Our Team had a great time interviewing this ‘Haryanvi Chora’, know how he made it to the top and even you can bring Golds for our beloved ‘Bharat Maa’.

This began from my village itself many years back, I used to accompany my elder brother for training and that’s how it all started.

Know me Beyond Boxing

Had I not been a Boxer then…

“I never thought about anything else”

Hanging out with friends 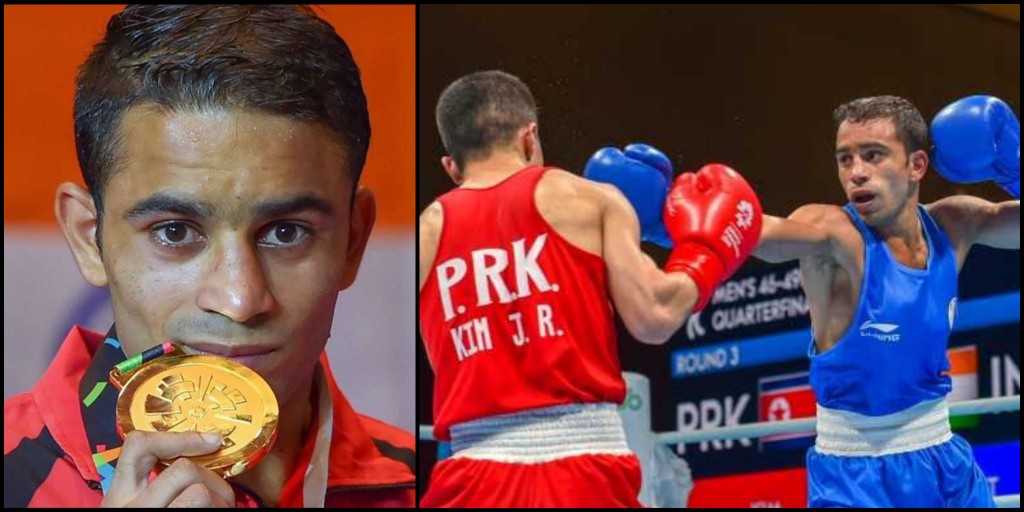 Whatever strategies my coach guides me in training and during matches, what I seek from him time to time is my success mantra.

What were the hardships/hurdles you encountered and the way you overcame in your journey?

Firstly, I belong to a middle-class family, we both the brothers were boxers, and we couldn’t even afford gloves at that time, so my brother decided to quit boxing and joined the army so that I could do better in boxing, after that our boxing federation got banned for 3 years and it was very difficult for me to manage as I needed a job to run my family, my sir helped me a lot, he took me to Gurgaon (Gurugram) and looked after me and my practice. He made sure that I get proper meals and he even arranged equipments for training, he used to bring food for us when we were out of town as proper meals are hardly available outside, but my sir somehow arranged it all the time. These were the most difficult days of my career, but my sir had my back.

Facing failure is a good way to train oneself for the future to succeed. When you fall, you get up and don’t remain lying on the ground. There is always a triumph after failure. One cannot be a slacker all the time. So, to be a winner, a breakdown is necessary. It’s a motivation in a positive manner. If I would have failed more in my career, I would have become a better tabla player and a composer.

Whenever I lost a match, my family would call me immediately to ask me about my condition whether I got bruised, am I alright? My family motivated me a lot, especially my elder brother and coach. Whenever I won a bronze or a silver, they used to calm me down by telling me to start all over again from the beginning and focus on my target and this is what got me here.

I was in Guwahati for National Championship and was being proceeded to the semifinals after winning the quarterfinals and for the time being, my coach came to meet me as he couldn’t arrive earlier because that place was too far and could not be approached easily. During the finale match, he came to me and said only one thing, referring to the strategies of my opponent he gave me a hint by recalling Dharmendra’s dialogue, “Hamesha aage badhke hi khelna hai” and I understood the context behind the dialogue. My coach and I being a Dharmendra fan quickly interpreted this and then I won Gold. This is how I got influenced by my coach and Dharmendra.

Yes, there was a tournament held here and we were told that there is a guest boxer who was an Olympic champion coming to fight and everyone including my family, friends, and coaches knew that I’m going to knock him out. So, I did a research on him, watched his videos and got aware of his weaknesses. I successfully knocked him and that triumph felt as “Yes, I Am The 1.”

I used to train with my coach in Gurgaon (Gurugram), as there was a lot of heat in summers, my coach took me to Himachal for practice and I trained there for a month, the climate was very cool and the landscapes, slopes were also a perk for training in the mountains. As we returned, I had a tournament at a state level and as I began to fight my performance was ranked high as my skills, stamina, and endurance overall improved due to the training in the mountains which also leveled up my confidence. And, before Asian Games, I went to UK to train under England’s boxer who was a left-handed player and that training was very viable for me as I developed skills due to practicing left-handedly with that player. Training is indeed a very crucial phenomenon for me.

Could you reflect on the importance of systematic training in Boxing?

What is Speed Training?

It usually takes 3 hours of practice daily but in Speed Training, we cut short it to a 1-and-a-half-hour session and double up the energy. All the punches and hits which we do in a 3 minutes round is done in 1 and a half minute as it increases our stamina and endurance before the match.

Our youth is very enthusiastic in India and what I feel is since the age of 16 years a person should get into boxing. The 10 years period from 16 to 26years of age is a perfect time to get trained in Boxing because weight management is a crucial aspect in boxing and heavyweight boxers tend to spend more time in the game, but in India, light weighted players are in more numbers who bring medals.

Technology has been changing the way people get trained in Music. What’s your take?

Initially, we were depended upon our endurance but as technology has intervened in our training, the scoring aspect has improved a lot in Boxing. The scoring system in India is very vast. Coaches from foreign are assigned in India and they have changed a lot of techniques according to the Indian standards. Training is mostly done on a large scale in India, but the techniques and skills shared by the foreign coaches are helping us a lot. There has been a lot of change in the Boxing scene in India in past 2-3 years as many medals have come home.

How can one select an ideal ‘Guru’ for getting formal training for Boxing?

I don’t know about others but for me, all I could say is my Guru has motivated me a lot and the one who motivates you is your ideal Guru because he is the one who guides you in every thick and thin of your career. From a short meal to International tournament’s strategies, he will plan it for you to hit the right move. My coach is the best coach according to me.

If you were to bring one big change in the way people get trained in Boxing, what would that be?

The environment should be good enough as here in Haryana and Delhi, the temperature is just too much 3-4 months before September, and we are sent to the northern areas such as Shimla, Himachal for training where our stamina and endurance increases. And even we are sent overseas for training such as UK (United Kingdom), where the weather was so pleasant that we never felt the feeling of getting exhausted, and even if we get got tired, within 10 minutes of break we used to recover and get back to the training. Therefore, the weather plays a very important aspect of training.

What do you suggest for better accessibility of training Sports in remote parts of India?

There are many places where a boxing ring isn’t available, not even a ground for playing. So, if a basic playground is arranged in such areas and if some good coaches for training are sent there then a very good number of players would show up from the remote parts. Because in some villages, people don’t even know what Boxing is and if proper knowledge and training are given to them then I’m sure they would emerge champions as I know there is a lot of talent hidden in villages and even I’m from a village. The lifestyle of villagers is very pure due to the ‘Desi Food’ and environment, youngsters are physically fit, and a very good amount of talent could come out from villages.

In your opinion, what are the basic key traits apart from formal training that makes a person “imd1”

‘Endurance’ is the key, the more you give output in a sport more than 100% and when you put that in mind that you have no other option but to do it then one would surely get good results.

Your piece of advice to parents and new generation especially when some people are skeptical about a career in extra curriculum.

All I would say is, encourage your children to spend time in the playgrounds, keep motivating them because nowadays Sports is getting recognized everywhere and due to some good initiatives by our government like ‘Khelo India’, a player gets a good amount of support since the beginning of his/her career and hence sports have become a viable career option.

One thing which you feel you want to change from the past while you walk down memory lane ?

Only one thing which is that I used to skip training and run away to home, I could go up to any extent to be at home even if I’m not getting a holiday but when I realized that I can do a lot better things for me and also for my nation as well then, I started focusing on the training.

As I said parents’ motivation is the prime factor, even if their child loses, they shouldn’t let him/her down by saying that “you cannot do it, leave it and focus on studies.” Sports needs time and practice, so let children take them and support them in every way.

This is to the youth of our nation as they are the future, ‘work hard and bring medals for our country to make our countrymen proud.’