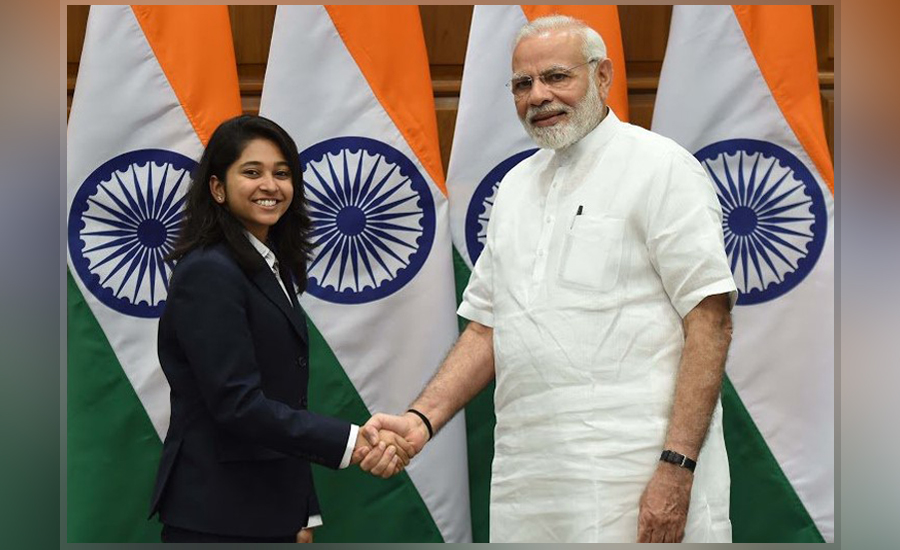 At 17 when most teenagers are upbeat enjoying their best phase of life, this young star who literally shot to fame with her antics at the recent Commonwealth Games is gung ho and all about up spirits for her future winnings. It has been a short journey for her and yet this girl is nothing short of what it takes to be a star player. Hailing from a small town 30 kms away from the main city of Kolkata, she has proved that following dreams knows no distance. And while not many are aware of a major mishap happened with her initially, it could have been a setback for her career. But it was her sheer passion for rifle shooting that bought her where she stands today. The girl is none other than Mehuli Ghosh! Let us know her journey and what inspired her to become The Star that she is today.

I started off in 2014, prior to which in 2013, I used to watch Olympics and loved to watch only two sports i.e. Rifle Shooting and Swimming. I found shooting very interesting as it was not a well-known sport. Then I started gathering news and other relevant information about Shooting. My father being a temporary employee in West Bengal government, struggled for a year to collect enough money to allow me to withstand my passion. Then I joined Serampore Rifle Club in 2014. Later I was mentored and coached by former Indian Olympic Finalist and Arjuna Awardee, Joydeep Karmakar at the Joydeep Karmakar Shooting Academy.

There is no sacred success mantra as they say. It is always one’s willingness to give their best shot and whatever it takes to be the best. Be it discipline, dedication, hard work. If you want to succeed at something, you might as well put in efforts with your heart and soul.

Had I not been a Rifle Shooter then...

may be in Karate or Swimming

Maldives as I love beaches

Till the Last shot

It’s been a very short journey for me to talk of any hardships. Perhaps, the only struggle that I have come to terms was when I was training earlier and accidentally the stray pellet hit a worker while practicing. It resulted in me being banned as a shooter from my previous academy. But under the coaching of Joydeep sir, I could bounce back and win accolades for myself.

In all these years that I have seen people around me have always maintained their composure in difficult times. Failure is not to be looked down upon but as a stepping stone towards succeeding. Especially for a sportsperson, our journey to survive in this competitive atmosphere is very tiring both physically and mentally. But at the end of the day, we all learn from our share of failures and grow eventually towards being the better person in our respective fields. The sheer passion to not give up and win keeps me going in difficult times.

My major source of influences has been my parents and Joydeep Sir. Because they believe in me and that I can succeed. They help me push myself to go achieve and be the best.

I am yet to experience that moment. It is too early in my career to answer this question. However, there was a big lesson and funny incident that happened recently at the commonwealth games that I would like to share. It was supposed to be my last shot which was the 24th shot and I scored a 10.9, the highest and thought the game was over. My name appeared on the screen and as per the scored I held the No.1 rank. I was very happy and proud at that moment. But a few minutes later I was told by the panel that the competition is not over, and I am yet to face a shoot off with another participant. So that small moment was a big one for me. But, it was an ongoing process. So, I coaxed myself into believing that it is okay! I have just started my career and there are going to be big wins for me.

Could you reflect on the importance of systematic training inRifle Shooting

Systematic training in any field of sports is essential. It not only trains you physically but also helps you adapt to the mental strength that is required on field. With correct training and knowledge of the technicalities, it becomes easier to become a master in your choice of sports.

Are there any prerequisites like age, fitness or a mindset required to pursue Rifle Shooting?

According to me there are none prerequisites that are required but only your passion to pursue the sport. It is all in the mind. If you set your mind into achieving and being the best, you will be that. It is only reflected in your determination. Nothing else can stop you.

Technology and scientific training has been changing the way people get trained in Rifle Shooting. What’s your take?

Definitely. Technology has opened new doors to everything that seemed so difficult a decade ago. But today, especially with people of my generation the advancements have most certainly broadened the horizons of learning and acquiring knowledge from around the world. Rifle Shooting is an expensive sport, but with the help of technology, certain basic lessons and others have been accessible to people who want to know the sport and its dynamics. In such cases, technology is a boon.

How can one select an ideal ‘Guru’ for getting formal training for Rifle Shooting?

Selecting an ‘Ideal Guru’ can happen only if there is Belief, trust and faith which is common amongst the student and mentor. Once the mental connect of the two is on par with one another, the student teacher duo becomes an ideal team that can win wonders. In my case, I am lucky to have found my ideal guru in Joydeep Sir.

What do you suggest for better accessibility of Rifle Shooting in remote parts of India?

Like I said earlier, technology is ever expanding in our times and thus even remote parts of the country are getting aware of the facts associated with this sport and others. Media plays a vital role in connecting the remote parts of our country with the multidimensional sports plethora of the world and the progression so far has been commendable.

Parents should let their kids explore. One can never decide fate and things which brings happiness. Indulging in the arena that brings compassion and happiness together for a child, that is his/her true calling. The child should be encouraged and given support. I am grateful to my parents for believing in my dreams and letting be choose the field I wanted to be in. I hope and pray all parents do the same for their children.

None. I am here because of all the happenings in my past and am glad my life turned out the way it is now. No regrets!

Lots of love to my family, friends and fans, Go ahead and Fly High!!!