The Arjuna Award shooting star, who once considered selling his kidney to buy a rifle! - The story of Joydeep Karmakar 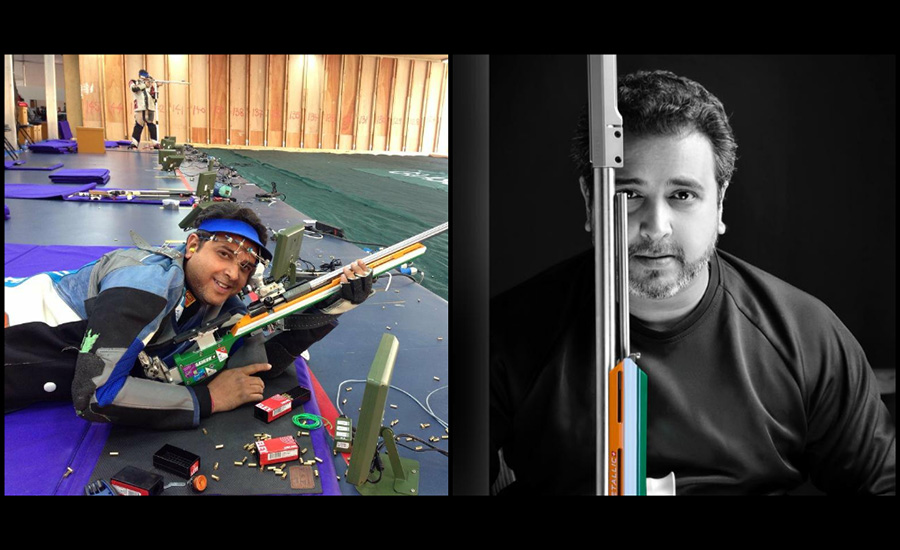 The Arjuna Award shooting star, who once considered selling his kidney to buy a rifle! - The story of Joydeep Karmakar

A unique player who has surpassed his own record and is the only silver medalist in the World Cup Prone event from India. A sportsperson and Author of his book titled ‘My Olympic Journey’ depicting his painful fourth in London Games. Currently he has set up a Shooting Academy named "Joydeep Karmakar Shooting Academy" in New Town region of Kolkata, where he with other International shooters are training new comers to master the gradations of Rifle Shooting. His National Record Scores of 594/600, 595, 597, 598 & 599 from 2005 to 2010 was exceptional. He once considered selling his kidney to buy a rifle, but then became a National champion with a borrowed gun. Joydeep Karmakar has participated in 28 World Cups. Even though he missed out a London Olympics medal by a fraction, he didn’t miss being named for an Arjuna Award for sporting excellence. He is the first & the only Indian to win a World Cup Silver medal in the 50m prone event in 2010 at Sydney, where he fired 599 to surpass the Asian, the South Asian Games records. This shooting star and a trouper of 28 World Cups has created his mark permanently on the target.

Team imd1 had a chat with him a few days ago, read on to know his further!

My uncle (mother’s younger brother) was very fond of me. At the age of 6 he gave me a toy air gun. He was an astrologer by hobby. He predicted I was born to be a marksman or a surgeon. Though he wasn’t monetarily strong, he managed to buy me a toy air gun and it was a hi-tech costly one. I could remotely control my target. The accuracy I shot with, made me realize my hidden talent. This fascinated me. At the age of 10, my neighbor suggested my parents to enroll me for a shooting class. I became serious and at 14, I was a National Record holder in Junior Championships with Silver medal in 1994. Even after this achievement my parents couldn’t buy me a rifle. Those were long struggling years. Many people helped us as I was from a humble family. Our coach was from Orissa and was a master in shooting. He was old man with an old fashion sense. He asked me, “Is your father a rich man? or else go back”. I replied him by saying, “Though my father is not a rich man, I will still continue learning and not back out”. This is how it started and within 4 years I became a National Champion.

There is no success mantra which I follow. I am very tenacious and determined. I don’t keep anything pending and strongly believe in things which motivate me. The mind will go where the spirit takes it.

Had I not been a Shooter then…

Passion of Christ, “See, mother, I make all things new”

What were the hardships / hurdles you encountered and how did you overcome them?

As an athlete my journey is a protracted one. The tussles were more than the achievements. When I was 10 years old I had to borrow rifle before the competition took place. There had been hard moments where I had to borrow money. People told me to take loan as even sport is part of education. I had stopped training and was on the verge of quitting. But then I got a job in the railways and things started to change. I became the National Junior Champion in 1994, performing with a 45-year-old rifle borrowed from a club. With the help of loans and some sponsorship I bought my first gun in 2003, in the 13th year of my shooting life. So, at 23 years of age I had my own rifle. When I started my academy, I bought each rifle for every student from my own bank account. This was my biggest achievement. The number of well-wishers increased, and they came forward to support.

When you have specific Gold medal in your focus and you have a perspective in life, failures don’t bother! I had disappointments in my journey, but I still achieved victory.

Do you think Rifle shooting and its learning’s can be helpful in life even if one does not want to consider it as a career goal?

I never learned shooting. It taught me everything in life. It’s an unforgiving sport. There are no difficult smashes to tackle. It’s something you have to achieve yourself. It’s the philosophy of the sport which teaches you the nuances of life.

My father was the one person who guided me. He was a National Champion in other sport, but he taught me important facets of life. He never forced me to study and excel in it. He let me choose my career. He also told me to draw inspiration from others.

Whether its good situation or bad you have to be your hero. When you get the self-confidence, and know that I am capable & strong person, you realize that ‘Yes, I Am The 1’. It’s important to believe in yourself at every vital moment of one’s life.

From 1989-91, I received basic training of holding rifle and focusing on target. Later I learnt from reading books & observed others. Many things that I was not aware, made me draw inspiration from others.

Could you reflect on the importance of systematic training in Shooting?

A systematic training plan is necessary in Rifle Shooting as one cannot rely on self-learning for a long time. If you look at Chinese & Russian athletes, they are excellent & well-polished due to receipt of good methodical training. The mind-set for this sport has to change in our country. We need to create a platform and transform the perception of people. The overall treatment to all games should be same specially at Olympic level. We have talented players whom we need to bring forward and train for international level sports competition.

Are there any prerequisites like age, fitness or a particular type of mindset required to pursue shooting?

10 to 18 years is an idle age to start taking shooting lessons. But I have a lady student coming from conservative background having two children & a big family. She is very talented and also qualified for National Championship. So, it’s all in the mind and personal ‘WILL’ to do what you want. One needs to understand the wide spectrum of the sport, if you study it in a comprehensive way then it becomes easy for anyone can join the game. No wonder in the sport of Shooting Oscar Swahn won an Olympic medal at the age of 72!

Technology and scientific training has been changing the way people get trained in shooting. What’s your take?

It’s a very scientific sport. Here technology is at higher level as it involves using weapon and one needs to know the correct dynamics. The right engineering has to be in place. Biological and psychological demand is high. The effort of the shooter becomes less if it is well researched. The first-hand technology is always with Russian & Europeans. We need to have a lab which can do research. There is very less guidance and availability of resources.

It’s very difficult to select a guru who can coach, as one has to be a formal athlete with vast experience. Many institutes have mushroomed in India but selecting the right one is a task. The quality of training should be good and not just imparted for the sake of coaching. One needs to have a passion for the sport and guide future athletes.

What do you suggest for better accessibility of shooting in remote parts of India?

The equipment’s, material & training required in Rifle Shooting are costly. Reasonable & right infrastructure has to be in place. This sport was once perceived by Maharajas as a hobby but now it’s even taken up by middleman. Currently 5000 shooters are participating in National Championships alone belonging to various backgrounds. Many are from villages and can’t even communicate properly. We even have participants from armed forces. So, there is a mixed crowd of participants who are competing in this sport.

In today’s competitive world, parents outlook towards their children’s interested career have changed. Yet it’s important to channelize their energy in activity they are proficient in. Motivation has to be there even if one fails in the first stage. One need to help kids get back in form whenever they lose a game.

Self-confidence, Self-motivation, being optimistic, accepting things as they are, not complaining on small failures, overcoming weakness and moving ahead strongly are some of the key traits required apart from formal training that make “imd1”.

In our society where education is considered priority, apart from academic’s, talent gets diverted most of the time due to pressure, and imposed priorities which were once an unfulfilled dream of individual parents. It’s important that parents don’t compare shortcomings in their children and just keep them motivating to do their best. The thought of “imd1” helps here to build self-confidence and build right attitude.