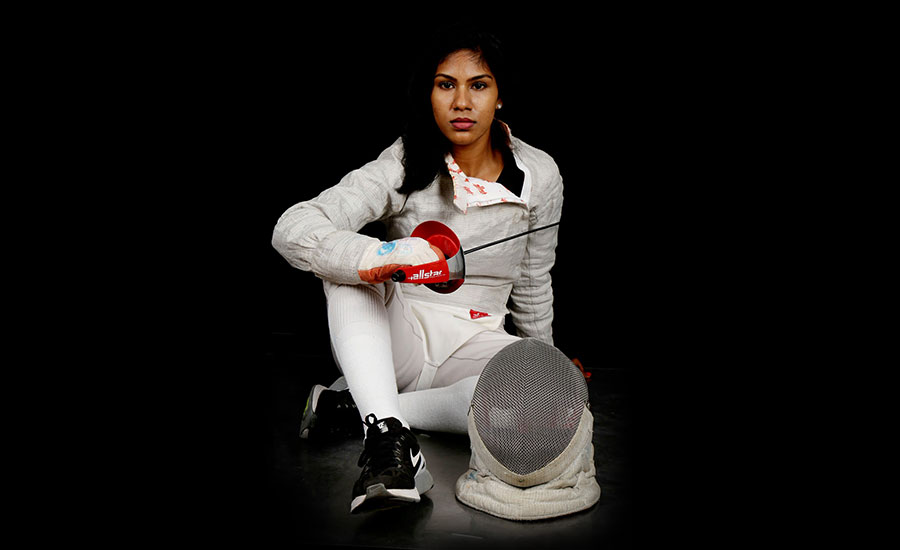 Many of us may not even be aware of ‘Fencing’ as a sporting discipline. Fencing is a combat sport using bladed weapons where competitors – both individual and team events – compete on a stringent point scoring system where points are awarded by making a direct strike at an opponent. And fewer still would know the sportspersons who represent our country in recognized international fencing tournaments. This foundation for the sport was laid down in India by ‘The Fencing Association of India’ in 1974 and recognized by the Indian Government in 1997. One such player, an Indian sabre fencer, who made us proud by bringing home Gold is C.A. Bhavani Devi, a true source of inspiration for the women of today. She has encountered many hardships to pursue the sport of her choice and ultimately, she has excelled in it. To become a fencer, one not only needs talent but also a lot of discipline in training, application of mind and quick decision-making. Born in Chennai, and at a young age of 23, she has made our country proud by winning the first ever Gold by a woman fencer at the Turnoi Satellite World Cup in Iceland, 2017. She is currently ranked No.36 in the world and is a strong bet for Tokyo 2020.

Team imd1 had a chat with her a few days ago, read on to know her further!

We are keen to know where did your journey begin?

When I was in Grade 6, wasn’t exactly setting the academic world alight and this got me in trouble with my teachers. At that time, I just wanted to move out of the class and was looking for other ways to channel my energies. What I remember is that some of the girls from school were planning to participate in some new sports that had just been introduced to the curriculum. I went to give my name but most of the categories were already full. However, one girl asked if anyone wanted to take part in Fencing. I gave my name and I guess today it feels like this stroke of luck was more a case of destiny.

Had I not been in Fencer then 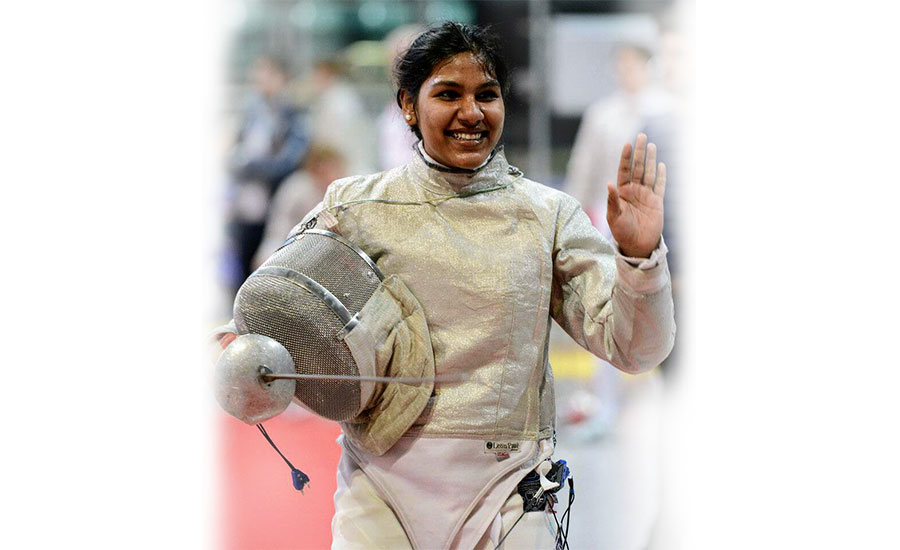 Fencing is a niche sport and not widely recognized in the country. Hence, there were shortcomings initially when it came to guidance and support. Irrespective, fencing had by then become a passion and I was already thinking of taking up the challenge at an International level. With a modest start, I only participated in competitions in India and won medals here. In the meantime, I continued to train and I realized that to grow, I needed to expose myself to International Competitions. I had learnt at an early age that initially I need to rely on myself and train diligently; support and the right coaching would follow. Once things started falling into place, my own training evolved, guidance was finally there and I was competing at a good level. Now I am getting trained abroad, I’ve won medals, and I have finally been able to showcase my talent at recognized events across the world. The path forward is still very challenging but as a sportswoman, this is why I compete, so I have no complaints regarding the hurdles. They’re there to be overcome!

I haven’t succeeded yet! I have had my fair share of setbacks but I am still learning, thanks to the burning desire to learn. I know if I learn consistently, there are endless opportunities ahead of me. To realize my dream, there is still a long way to go but with each day, with each competition, I feel like I am going to the next level and this is making me push myself to give it my best. I wanted to make the cut for Rio in 2016 but couldn’t. Despite trying hard, training diligently, I couldn’t perform well. However, I have learnt from that setback and now I want to give my best and Tokyo is firmly on the horizon. I want to be there in 2020!!

My family, especially my mother…and there’s also my coach. I was learning fencing initially with Mr. Vishwanathan in Chennai and then moved on to Kerala - Sports Authority of India (SAI), to be under the guidance of Mr. Sagar Lagu. In those initial days, their help was pivotal and they pushed to bring out the best in me. Even now, I continue to be an athlete of SAI - Thalassery, Kerala.

I am the 1 because no one in the country other than me has reached this successful mark in fencing. Speaking of the ‘moment’, I have something to share from the year 2014. At that time, the Indian Fencing team was not sent for Asian Games by the government due to some reasons. But I was already in America, preparing myself for the Asian games. Just a night before of my flight to Korea, I realized we wouldn’t be allowed to participate.

But I decided to stay back and continue my training for my next competition. Instead of feeling bad and crying over spilt milk, I delayed my tickets by 2 months and stayed back despite not having enough money. My decision was vindicated as I won Silver in the ‘Under 23 Championship’. That was my ‘I am the 1’ moment! I firmly believe that nothing can stop you if you have the will and the patience.

My first training overseas was in 2010 before the Junior World championships. The International Fencing Federation organizes a week-long camp and invites participants from nations where fencing is not popular and assigns a coach for training. I went for that competition from India. There was an Italian coach, Mr. Nicola Zanotti, who was impressed by my skill and was surprised to see an Indian fencer with such dexterity and offered to provide guidance after the competition, to improve my footwork and polish my fencing skills. After the event, I contacted him on Facebook. This was how my training began with Coach Zanotti and I immediately repaid the faith by winning the Junior Commonwealth championships. Due to inadequate funds in 2012, I practiced in India, even though I wanted to train abroad. In 2013, I wanted to go for train in Italy and needed sponsorships to help me get there. As you will know, funding is an issue in my sport and my parents and I have gone the extra mile to manage to get these sponsorships. But for my training in Italy, thanks to the help some well-wishers and the SAI, I managed to get the funds and train in Italy. This training stint proved invaluable and allowed me to break into the top 64 fencers in the world club.. Again in 2014, I took formal training for one month before a major tournament in Italy. Here I want to add that in India there are talented fencers but we need more training to enhance our skills and training camps like these can make all the difference in the world. Since my Italian coach was travelling, there was also a formal training program again in the USA prior to the Asian Games. My formal training hasn’t been sustained and that is where the help is required as without awareness, investments won’t follow. In India, we are endowed by mind but we need formal training. I really wish to change this stereotype of “If you don’t get sponsorship to be trained overseas, you lose a chance to stay ahead of the game or even at be par with it”, but will add that training under the best coaches is definitely going to pay dividend.

Are there any prerequisites like age, fitness or a mindset required to pursue fencing?

Just like any sport, one should start young and I would say that children should start training around the age of 7. One needs to do correct exercises to keep the body fit and concentrate on coordination. Most of all, one needs passion a deep respect for the sport.

Technology and scientific training have been changing the way people get trained in Fencing. What’s your take on this?

According to me, training is a combination of scientific, physical and mental aspects. If someone investments a few hours in training, results will not materialize. The training must be systematic, even if it is one session in a day, and sustained. Speaking of technology and scientific training, no sports is an exception.

How can one select an ideal ‘Guru’ for getting formal coaching for fencing?

It is difficult to judge a coach in one day. Your coach must understand your psychology. He or she should be able to read your mind and almost translate your unspoken words.

What according to you can be a scope of improvement in training for fencing in India?

Endless scope exists because of the minimal exposure so far. We have very talented fencers in India which positively widens the scope of improvement. Talented and passionate fencers would be able to perform much better if they realize their true potential and get international exposure.

What do you suggest for better accessibility of fencing in remote parts of India?

There is no place in India where you will find good basic equipment needed for fencing training. Even in cities, people are not much aware about fencing. We do not have all the facilities at one place. For practice, we use sticks instead of blades. These blades are expensive and if they break, we might not even find good ones here. Therefore, we use blades only during competition.

So awareness and accessibility are a problem everywhere, even in urban centers. So, we need to address this first. To make fencing popular, the foundation must be laid at school and this is being done in Chennai and it has been positive. There is no one from my batch who sustained fencing after school due to lack of support in Fencing. They have selected different professions. Many a times people ask me, what I get from Fencing. The government should boost this sport from the school level itself.

Your piece of advice to parents and new generations.

Women are more emotionally vulnerable and that’s an area where parents can pay more attention, and support their daughters a little more. They should keep options open for their daughters to choose their career. Let the children take their own decision. Parents should also not only think about marriage but how their daughters can live their lives on their terms and how they can become self-independent

I wanted to do many things in life like dancing, singing, etc. I was also playing squash. It happened one day that both squash & fencing competition were on the same day. I had to decide where I to go. Even my parents left the decision on me. I didn’t inform anyone. From school, there were two buses going respectively for both the competitions. At that moment, I decided to go for fencing. You might not identify your passion initially. Sometimes it might even take a year to realize which talent you want to develop into a profession. Be patient and then take the decision and don’t look back.

Is there any moment that you would like to change from your journey so far?

Honestly, I don’t want to change anything but if pushed, it would be qualifying for the Rio Olympics as I was very nervous and this hampered my chances in that competition.