At an age when people start retirement planning, one person who quit his CEO position to enter an alternative career, is the Stand-up Comedian - Atul Khatri popularly known as the ‘Horny Sindhi’ who loved tongue-in-cheek kind of humor. A regular middle-aged looking man in his 50s who redefined risk-taking at peak of his career by successfully venturing into stand-up comedy. With the ‘CEO’s Got Talent’ award, rated as one of the top comedians by CNN-IBN, the only Indian to perform comedy in the Dubai & Hong Kong International Comedy Festival - he has proved that age is just a number, never a hindrance to pursue a career of your talent. He has been featured in various advertisements, conducted 400 comedy shows and recorded many YouTube videos. He doesn’t believe in performing cliché jokes but rather sticks to personal subjects that he has experienced and put forward in the form of comedy to his audience. Kevin Hart puts it right, “Stand-up comedy is mine: it’s my entity, it’s my brand; I own it. I do it when I want to do it.”

After a long journey in your professional career, what made you pursue new journey in Stand-up comedy?

I went through a midlife crisis issue in my 40’s where I had a second thought on my career. Usually at this age, your kids are grown-up and ready to step in their new life to pursue their college era. I thought I am getting old and wanted to do something productive with my life, instead of regretting later! I wanted to do something unique. After a deeper thought, I made a resolution in the year 2012 to try out a different arena. That’s when I signed up for the Open Mic Contest. I had to work hard on it as it involved lot of writing. I had the time and talent, but still had no intuition of making it as a future profession. If you observe, there is always one person in your group of friends who cracks jokes and makes everyone laugh. I too was witty by nature. I loved watching comedy movies featuring Russell Peters & Eddie Murphy. This art form was my favorite and given a chance to choose from serious & comedy series, I would select the latter. In 2009-10, Facebook spread like viral addiction. People loved posting their opinions & expressions and in return, felt proud of receiving appreciation, gratification & likes. I too posted my original content & videos and people found me funny & interesting. As this comic wave was new on FB, I received more attention. Many suggested me to take up Stand-up comedy which I was not aware of, as it was a new concept in India. I saw a few shows and gave my first try. This is how it all started!

‘Running Marathon of Life since the year 1968’

Had I not been a Stand-up Comedian then… 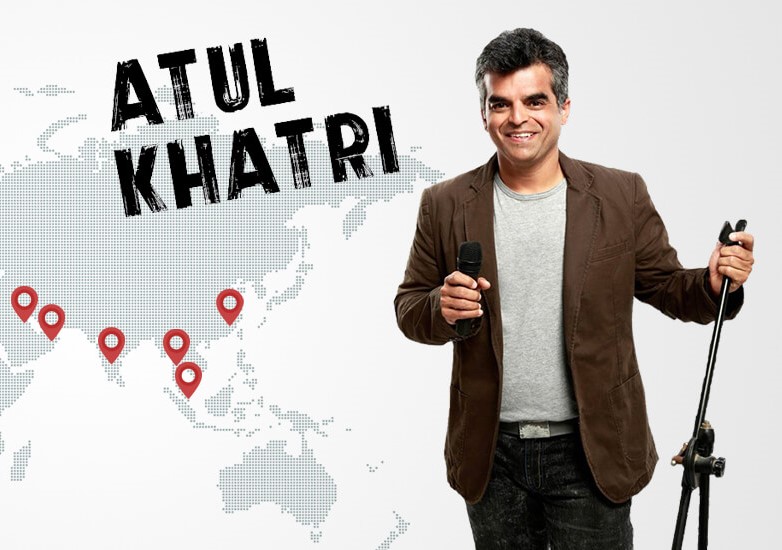 It’s easy to make people cry and tough to make them laugh, what’s your mantra?

It’s important to be true to yourself. Around the stage there are four sides, one behind the stand-up comedian, one on left and one on the right. But the most important section is where the audience is sitting, that’s the fourth side. The audience is very smart and intelligent; if you lie they will immediately know. For instance, if a 50yr old man says that, “Last night I went to a party and was dancing the whole night with two young girls”, the audience will immediately catch his false story. But if he puts it other way round saying that 2 girls approached him, introduced them as his daughter’s friends, it makes more sense! If you are true to yourself and speak your thoughts from heart, the audience will connect with your feelings as they will put themselves in that situation. They will react, laugh on your jokes even though they are simple ones.

Stand-up comedy needs live attentive audiences who understand and laugh at your jokes. It is like a theatrical play. Earlier this art form was not that popular. But gradually people started appreciating it. Initially when I did shows at a private party where it occurred that the bar counter was open, food was being served and people were hardly paying attention. They were busy talking amongst themselves and enjoying their drinks & meals. In one such gathering, the host came up to me and requested me to stop as no one was listening. I felt miserable and failed. It’s humiliating when people don’t listen to your effort. I realized my mistake and just hung around there observing people. I witnessed that people were not even bothered to listen to the speech delivered by the host. I shared my experience with some fellow comedians and asked their views on it. They suggested me one rule which I still follow - before performing, it’s important to check that the bar and food counter are closed. I even need to ensure that the audience is seated. Audience that is standing will never pay attention. If in such situation Russell’s talent doesn’t work, no one elses will!

I feel anybody who has the courage to go up on stage and make people laugh is an inspiration; it doesn’t matter if he is experienced or new in this field. I respect all my fellow Indian comedians. Writing original jokes is equally difficult as making people laugh.

How do you decide on idea & topics for comedy? Are the jokes scripted? What kind of planning is involved?

Stand-up comedy is all scripted. Russell Peter, Johnny lever and other comedians perform scripted comedy along with audience interaction which is on the spot. One needs to have 3 hours of jokes ready which needs a lot of writing. If you are performing in a private party or a stage show, first analyze the crowd - whether they are youngsters, married or old people. Then, design and write material as per the demographics of the crowd before the show. Little planning is required beforehand and after visiting the place there might be some prompt changes required. Being proactive & reactive is important. One must take care of the language the audience will understand. Jokes which happen personally work well and don’t duplicate or create copyright issues. Observational jokes from mundane details of life, comedy of political satire is common, so one can make jokes of different genre. One needs to look around and get ideas.

My parents were very old when I won the ‘CEOs Got Talent’ award. They were in their late 70s and saw me for the first time perform in front of 500 people. They were very proud and happy for my achievement. That was the moment when I felt like ‘Yes, I Am The 1.”

Stand-up comedy / performing art is not got required recognition in India, how do you think it can grow in India?

It’s a matter of time. It started with 50 people watching a show. But now we have a large audience anywhere around 600 people. People are slowly and steadily recognizing this talent. Thanks to social media! With information easily available and YouTube videos trending, people have access to all different types of data. For performers like us, this has been of great assistance. Before English comedy, Hasya Kavi Sammelan in Hindi was very popular. Recently, there has been a rise in Hindi comedy with artists like Amit Tandon, Zakir Khan & others. Stand-up comedy has also ventured into foray of languages including Tamil & Marathi and few more. I witnessed a Hindi comedy show in Lucknow where I was performing; the audience and technicians were Desi’. They were Hindi guys who understood the language of the artist, so even a comedian from remote areas got recognized. It’s an alternative entertainment which one can watch with friends & family. I have fans all over the world though I am staying in Mumbai, so I thank social media for such a worldwide recognition.

What are the pre-requisites or key traits to become a Stand-up comedian?

It’s a lot of hard work, writing & reading of what’s happening around, in Bollywood, cricket, & political field. One must write new stuff and try out variety of topics. Sometimes it takes months to design a small material. It’s like challenging yourself to take audience along in this journey.

After engineering, most friends went abroad to study their masters. I was very lazy and not motivated to go abroad. I pursued a course in Manchester Business School, England; that too very late after 10-12 yrs. I wish to have gone for it immediately after my engineering.

Any message for your fans & viewers?

Anyone who wishes to enter stand-up comedy should be ready for hard work and put extra efforts of writing/scripting. It’s not an easy job. One must be ready to face the challenges that come along with it. My best wishes for those who want to pursue this art.