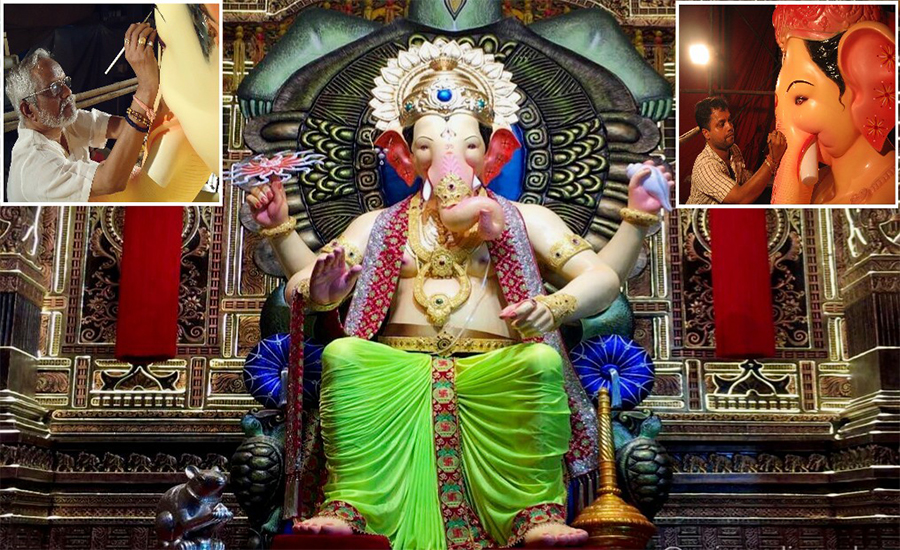 Since years, ‘Lalbaugcha Raja’ has remained the biggest attraction of Mumbai’s Ganeshotsav. What drives millions of ‘Ganesh bhakts’ to Lalbaugcha Raja is the grandeur of the pandal and the Ganpati idol sitting within! As ‘Ganpati Bappa Morya’ echoes through loudspeakers at Lalbaugcha Raja Sarvajanik Ganeshotsav Mandal, it is necessary to listen to the soft spoken Kambli family who works round the clock behind the ‘Raja’ scene! Kambli Parivaar has been making this most famous Ganpati idol ever since 1934. Madhusudan Kambli was a sculptor of idols and would have roaming exhibitions at festivals across Maharashtra. He began organizing the idol for Lalbaugcha Raja in 1935, when some of his friends recommended his name to the organisers of Lalbaugcha Raja. After his demise in 1952, his elder son Venkatesh took over. When Venkatesh passed away, Ratnakar Kambli, the current head of the family, started designing the idol. As of now, Ratnakar and his son Santosh are sustaining Bappa’s grandeur at Lalbaug!

Team imd1 got lot of details from this Father-Son duo about why Lalbaugcha Raja is the rockstar of this festival!! Read on to know these true sevaks of the Raja…

My father, Madhusudan Kambli used to put up exhibitions for displaying decorations which people could attend and watch for free. He used to put up Shivaji Maharaj idols and few decoration ideas. That was his major business then. The amount collected through exhibition tickets was his earning. Later with Bappa’s blessings, we started making Ganpati idols for the utsav and the demand for both, exhibitions and the idols picked up. People also asked us to handle decoration for the idol. What actually became famous was the design and appearance of the Ganpati idol in Lalbaug. As of now, we also have a demand for replicas of Lalbaug idol, not only in Maharashtra and India but even abroad. My elder brother Venkatesh continued this after my father passed away and after Venkatesh, I took over. I have three kids. Santosh, the eldest son is into sculptures while Saish is a professional photographer and the youngest is into production. During the Ganpati season, both the brothers help Santosh. I am 77 now and have got weak with heart problems and operations. My son, Santosh is taking it all forward in a great way. I am satisfied that the family legacy is still continuing. 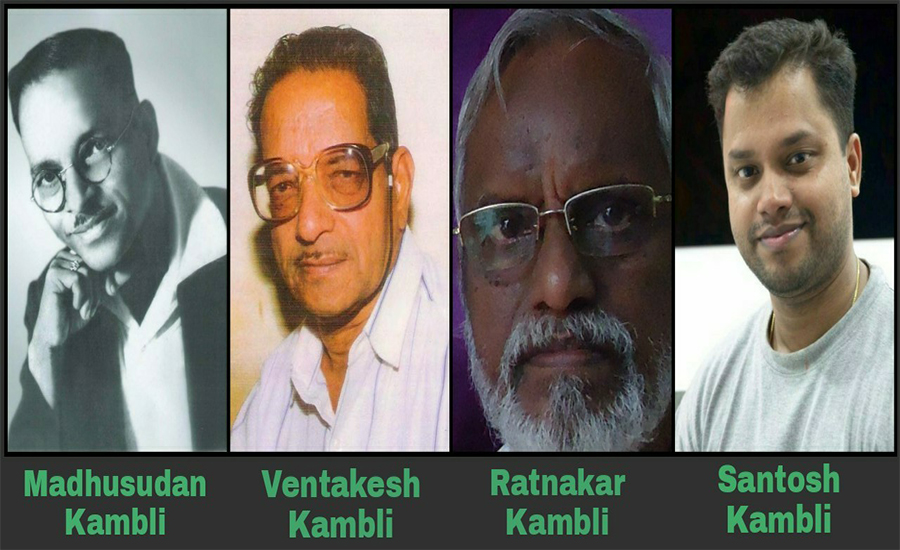 What is the process from Starting to End for creating Lalbaugcha Raja or any other idol?

We make a cases/dyes of various parts through a fibre which is later used to make other idols by assembling all the parts together. The idols can be made of fibre and plaster. The ones that are immersed in water are made up of plaster as fibre doesn"t melt in water. Then, finishing touches are given to the idols. There are 5 to 6 size variants. Lalbaugcha Raja is of the height of 14 feet.

We hardly make the smaller idols because of lesser manpower. Our workshop too is small. However, all the idol makers are working here since 10-15 years and are thoroughly trained in the art of idol-making. They do many other things for their living, but after May every year, they join us back to make Ganpati idols. We don"t make more than 175 idols during the Ganpati season each year.

The idol making for Lalbaug starts in June. There is a "Paool Pooja" for the feet of idol but, then it starts in full force. All the parts are made separately and then taken to the location where it is finally assembled. Tuesday is the auspicious day for Ganpati Pooja. So, we usually begin assembling on a particular Tuesday a month before the utsav in the Lalbaug Pandal itself. We are called usually after the basic decoration of the pandal is done. After assembling the idol which is made up of plaster, we allow it to dry. Then we smoothen it and polish it. After that a coat of white colour, called the "primer" is applied and then the body colour is applied. Final stage is the painting. The detailing of the eye - the real Bhaav of the idol, is still done by me. All the other parts are well coloured by all the other artists.

What’s the success mantra of your family?

Whenever we make any idol, we make sure we do straight from the heart. Although it is our business, what makes us different is the way we perceive art. The way in which we make the Ganpati idol is our speciality now. From sculpting his face to sculpting the stomach, we do it in a very different way. Unlike the mindset of a bulgy tummy, Kambli Arts Ganesha is built with a modest stomach. The ‘SMILE’ on the murti’s face is our copyright! The eyes are very specifically designed every year such that from wherever you see the idol, it seems Bappa is looking directly at You!! My father learnt this art from his Guruji Shri Mungekar. Out of all his students, my father was one of his most sincere students. From 1935 onwards, my father, Madhusudan started making the idol for the pandal and the family tradition is continuing. Our family has been always praised for the kind of extravagant efforts we took to make the idol.

After Ganesh Utsav is there anything you do in sculpting?

Idols are usually more famous in the religious sphere; however, we make all kinds of statues and idols as per the orders we receive. However, the primary demand will always be idols of Gods and Goddesses. Dussehra, Ram Navami and Guru Purnima are other festivals apart from the Ganesh Utsav when we are deeply involved in making the idols. The Dwarka Mai Mandal decoration at Shirdi is our identity. Usually, the sculpting of idols keeps happening throughout the year.

Do you think Sculpting and its learnings can be helpful in life even if one does not want to consider it as a career goal?

Learning anything is good. As a hobby, sculpting brings in a lot of patience in a person.

With such tight and fixed deadlines, do you face unexpected challenges/mistakes and how do you handle those?

We take limited orders. It helps us to do our task much better. We just don"t accept any orders that we aren’t sure of completing within the occasion date. We don"t overcommit. While making the Lalbaugcha Raja, we have so far never faced any issue. Nothing ever went wrong. The idol isn"t officially ready before it is placed in the pandal. Before that all the little errors can be corrected. However, last year, there was a lot of controversy over the OWL theme that we took up for decoration. Many consider it a bad omen and criticized. We clarified through media support that decoration theme is decided based on extensive research and not just casually! The owl got lot of fame and there was no impact on the footfall at Lalbaug Darshan.

The way we make the idol, is liked by the audience. The happiness we see on the face of the devotees makes us feel happy and satisfied with our job. In all these years, the audience has never failed to like the idol"s design.

What has changed in last 20 years about process, material and expectations about idols?

Various changes have come in. On the matters of design, we keep on upgrading and moving on from extreme traditional designs. As far as raw materials are concerned, there haven"t been too many changes. The quality of colour has certainly improved. The use of PoP was lesser in the initial years. Now, PoP is used prominently because it is a strong material due to which we are capable of making Ganpati idols of a taller size.

How does it feel when you create idol of creator?

We begin making the idol by taking Lord"s blessings as a part of ‘Paool Pujan’ vidhi. It is a wonderful feeling to make it. It feels auspicious. Every year, making the Lalbaugcha Raja idol is our best time of the year.

How has the art evolved?

Gradually, the art of sculpting came up. It became more and more commercial. However, the number of sculptors has drastically come down. Family businesses prevail but in spite of the inclination, not many individuals enter this profession, especially in cities.

Do you think there is a need to have more well trained sculptors and how can one get training in sculpting?

There are not many in Mumbai. Villages have many talented artists. Some are really good but, others need to be trained. In our business, the one who doesn’t work upto the mark is not called in subsequent years for work. New sculptors keep coming each year to cities to try their luck.

We know there are many sculptors in remote villages, how can those be groomed to showcase their Art.

In the villages, there are monetary issues. Villagers are not paid well for their work. The culture of idol making is serious in cities especially like Mumbai and Kolkata where the craze of festivals is huge and worth admiring. Sponsoring them can help it build a lot. Sculptors come to the cities and get involved in the profession here. They need to be supported, trained and sheltered.

Why is sculpting more prominent in India?

The concept of "idol-worship" is the most prominent in our country. The presence of so many faiths, religious and spiritual practices is responsible for so many idols being made. The idol and its design are the physical representation of the faith and belief in any God or Goddess. It is deep rooted in the Indian culture and tradition.

What is the most difficult step to be fulfilled while making the sculptures?

Anatomy of the idol should be clearly visible. Understanding the expression, visualizing it and executing it well is extremely important. Whether the idol is two feet or twelve feet tall, making sure that the anatomy and look is represented accurately is crucial for any sculptor.

How do you feel when you see lakhs of people queuing up to see the glimpse of your idol and other crores through other social medias?

More than the queues, the best part is seeing the reaction of the devotees who gain darshan of the Raja. The way people believe that Lalbaugcha Raja will fulfill all their wishes is worth giving a thought to. All these years, the faith of the people is constant, in fact on the rise every year. We are happy about it! [smiles - full of satisfaction]