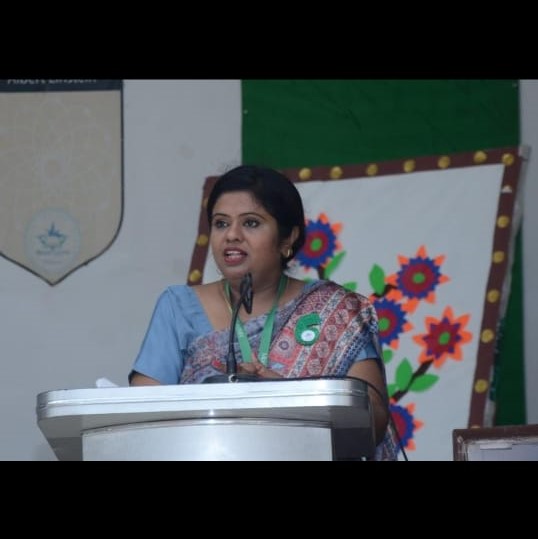 Maybe I was born to be an educationalist. And all because of my MOTHER, who knowingly or unknowingly became the torchbearer for me. I realized that there isn’t any bigger joy than the joy of shaping & carving one’s life through the passing of knowledge.

I still remember, being the elder one in the house; I always had this responsibility of taking care of my only brother, and the sense of satisfaction I felt on his achievements – be them big or small, is something unexplainable in words.

Moreover, even during school & college days, I used to prepare notes & distribute amongst my classmates so that they could also be benefitted from them. This actually gave more purpose to my studies as well as I had to prepare for every topic thoroughly so that each one of my friends could understand the same based on their individual levels of intellect.

And at last all these things, slowly but surely, amalgamated into me taking up this noble profession of education, where I’m nothing else but MY REAL SELF.

YES, and that too a very big one. In fact, I would go a step-ahead saying that the educational institutions should play a pivotal role in the overall development of students. This is because of the fact that educational institutions these days have enough resources at hand whereby students can experience all the practical aspects of life. The word co-curricular in itself demeans its value as it is sometimes considered as something outside the curriculum & not along with the curriculum as its essential part, which in actual should be the case.
We know that healthy mind resides in a healthy body.

These activities actually lead to the holistic development of a child’s mental, emotional & social character which is very much essential in today’s challenging world. The plethora of opportunities that have come up with these so called co-curricular fields are there for everyone to see & the students hence need a very strong foundation to grab them with both their hands.

To begin with, one actually needs to WALK THE TALK first – something which I’ve done all my life. I’ve always believed in the fact that children catch things up too quickly when they see their teachers doing the same in front of them. Even when I was a young teacher, I made sure that I got personally involved in all the inter-house competitions from coaching on dance, rangoli making, skits, march-pasts & many other co-curricular activities where I could give my inputs. As a class teacher, I made it compulsory for every child to participate in at least one school competition throughout the year regardless of the fact whether they were selected for the next level or not. Moreover, students who actively participated in such co-curricular activities were motivated further through timely rewards which gave them instant recognition & simultaneously encouraged other students as well. To sum it up, I’ve always believed that the students are always one - pat on the back away from realizing their real potential & the sooner they get that the better it is for shaping their personality & character.

This one task used to be really very tricky in the yester years where careers were seen only through the realms of academic excellence only. But, over the years the condition has improved to a much larger extent. These days, I come across parents who seek for admissions in a certain school just because of the quality of co-curricular activities being provided there. However, things are still far from being ideal as well.

For me, the best way of conveying the importance of co-curricular education to the parents is by having one to one interactive counselling sessions whereby we highlight the future prospects of the respective co-curricular activity, the desired skills to excel in it & the achievements of their own wards vis-à-vis others in the same field. I also cite real life examples of the students who were actively involved in co-curricular activities & went on to achieve much greater heights in their respective individual fields vis-à-vis those who were involved in academics only. I also ensure to let the parents know this real fact that academics only impart knowledge, but co-curricular activities actually help them learn the art of utilizing this knowledge & develop their skill set.

But the next question is - ‘What do we call it then?’ Although, I haven’t thought much about it, as this is one topic which truly deserves a thorough analysis, but still if at this point in time I’ve to give my superficial view of what best can be done then I would suggest first to do away with this co-curricular term once and for all & then find a way to bring these activities somehow into the mainstream education system whereby they are treated as major subjects not as ‘EXTRAS’.

Still, by just calling it differently, would things be mended completely - not at all – I opine. The schools have to emphasize that these co-curricular activities are as important as the mainstream subjects and this can be done by celebrating even the smallest of achievements made in the respective fields thereby further motivating the students for achieving excellence. Another thing that can be done is to involve the parents as much as possible, just like we do for other mainstream subjects, so that they stay updated with the progress of their child as well as with the prospects of the respective field the child has ventured into.

Produced 11 National Players & 35 State Players in a span of 3 Years.

My personal favourite has to be dance & to some extent sports as well. These two things have shaped my life inside-out. The finesse, delicacy & skill required for dance and the competitive spirit, passion & basic instinctiveness required in sports are few of the many important & core qualities that I could only learn by either being on the dance floor or being in the ground & never ever through the normal classrooms. These two activities always keep me charged up & bring an elation of no match whatsoever.

But, on the contrary & by no means of imagination, can anyone say that dance & sports could be my personal favourites. As they say, “People judge the book by its cover first” & this is where I lag behind. My body has taken a serious toil over these years battling with several ups & downs where dance & sports were made to sit on the back seat. Had it not been the fighting spirit & the will power imbibed from sports & dance during my school & college days, I & my body would not have even withstood the present, forget the future.

It is after all this that I realized that I get a new lease of life whenever I get involved in dance & sports activities. So as to pursue dance, I make sure that I personally get involved in choreographing young students whenever I get an opportunity especially at the time of major school events. For sports, though I don’t get involved that much at the school level but I make sure that on events such as Sports’ day, inter-house & other inter-school meets, I arrange an event exclusively for the teachers. On a personal front, I make sure that I dedicate at least 3 hour/week for dance or other physical activity and never ever cheat on this plan.

As quoted everywhere, I very much stand by this thought process that these activities must be made compulsory up-till a particular class level & an important part of the curriculum, so that every student irrespective of his higher stream of education, possesses the basic intuitiveness, skills & other important qualities to excel in life. Moreover, the interactions with the parents have to have sessions directed towards the status of their child & its future prospects.